The Corvians are an amphibious race located on Corvia IV.

Records are fairly sketchy but it is believed that they were transported to this world around 1,900 years ago. No arceological evidence can be found to suport the possability that intelligent humanoids lived on this world prior to this time period. As further proof the oldest structure on the planet is a shrine to Ch'Mnth'srv constructed in such a way that to this day very little damage or erosion has affected it. The next oldest structure still standing is almost 500 years newer and has suffered a lot of erosion damage over the years.

Old carvings and pictographs seem to indicate that they looked more like the images of Ch'Mnth'srv than what they do now. This is further supported by a few rare arceological finds that prove they have evolved over the years into their present form. Now true the changes are not major or radical but regardless they are still minor differences between how they appeared then to now. The most radical change was their developing the ability to survive for limited periods of time above water.

Unfortunately the advances in genetic sciences has brought another new aspect to light. Their DNA has been altered on a sub-atomic genetic level. The result has been the slow gradual progression from aquatic life form to amphibious life form. However it is now believed that prior to their arrival on this world that they may have been a land dwelling species that were altered so that they could survive underwater. If this is true then maybe they are slowly evolving back into their original form.

When they developed the ability to live above water it allowed them to explore the few large islands that dot the surface of their world. This happened just over 800 years ago. Since then they have progressed slowly towards being a pre-warp species.

They have a complex democratic system with a central government, 8 regional governments and various city governments. Each level of government is basically independent of the others. 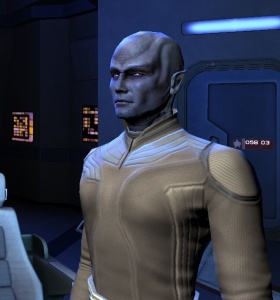 The Corvians are an amphibian race of people. They tend to be tall and slender with bluish gray skin tones and no hair. They have pointed ears and dark colored eyes. Distinctly humanoid, they all wear relativly skin tight clothes as they work better underwater. The men usually wear a cloth belt tied around their waist with the ends hanging down over one hip. This is basically the only difference between how the men and women dress.

While they are an amphibian species thay do need to fully submerge their bodies once ever 4 to 5 hours for at least 15 to 30 minutes. This is to prevent their skin, lungs and respiration system from drying out. Their skin has a slick rubbery feel to it that can be maintained with the use of special creams but they still need to be immersed into water at regular intervals.

As a species they tend to be fairly stable mentally, altho they can suffer from various degrees of panic and deep seated phobias about entering into any situation that might reduce or threaten their ability to have access to enough water to submerg their bodies.

Most of the people believe in a unifing deity called Ch'Mnth'srv. This translates roughly as the Dark One. This individual is normally shown to be more aquatic, fish like than the Corvians with darker skin tones. Many believe that this is what they may have looked like in ancient times. His followers have a basic set of beliefs that have been copied from the first temple found in one of the deepest parts of the central ocean.

They have a very large collection of tales regarding the origins of their people and their involvement with Ch'Mnth'srv. For the most part each tale has a point to it. Some form of lesson that in olden times would have been of use in ensuring not only their survival but peaceful co-operation.

They have a well developed society that has eliminated the need for social assistance. Communities work together to ensure that everyone with in that community has access to all the basic needs of life. Education is available to all for free and communites will find jobs for anyone who is unemployed and needs one.

Because they evolved from an aquatic species they tend to prefer stone sculptures and dance to any other form of art altho music and other forms of art have been developed since they became amphibians. However to this day very graceful and intricate underwater dances are still the highest form of pubic entertainment.

The most important custom is for every citizen to visit the first temple on thier age of maturity and at least twice more during their lives. While this visit is very brief, merely a chance for them to enter the inner chamber and touch the base of the first carved image of Ch'Mnth'srv, it is still considered to be a profoundly moving and important action.

Their on land cities are fairly well developed and are pre-warp capable. Their underwater cities on the other hand tend to be way behind. This seems to be a cultural thing as certain technology that has become available to them and that works underwater has not been implimented. In fact there seems to be no desire to change anything about how their underwater cities operate. The opposite can be said of their on land cities where any and every new technology they have is used.

They are fairly independant and can survive with out any trade but have developed a few solid trade partners. This mutual system has benefited them very well and supplies them with the luxury and basic goods they can not produce themselves.

They have a fairly small military that is supplimented by a very well developed national police force that is armed and trained more like combat military police than anything else. These police serve both as a kind of reluctant army force and as a very well prepared and competent civil response force. All of their true military serve on space craft and have only rudimentary personal combat training.

The first contact was made 238906.22 by the crew of the USS Mercury. During an away mission (purely an exploration and to gather stores on the planet surface), the Mercury crew detected a huge power source under the sea. Upon further investigation, they discovered an undersea city. To their surprise while under attack by a sea creature, they were saved by a defence mechanism from the city and the team were directed to enter the city where they met the Corvian Civil Leader Rashnan.

Meanwhile, above the surface, another team was gathering supplies in the jungle when they were attacked by another wild creature. Fortunately they were saved by the Corvian Military Leader, Jasron. To show their willingness to learn more about each other, Jasron was later taken aboard the Mercury to meet Commander Kells. When the team was transported back to the ship, one of the crewmembers, Gypsy Hawker, was accidentally transformed into a human/corvian hybrid. The Corvians offered assistance to help reverse the transformation process. In conjunction with the Mercury's medical team - they were able to save Gypsy and her unborn child. Once everything was completed the Corvians were escorted to the transporter room and returned to the planet.

This species was created by Lt. Commander Alexander James Matthews and the Crew Of the USS Mercury. With a special thank you to Lt. Jg T'Mihn Ah'mygahn of the USS Tiger-A for assisting with the original concept.

This species was approved by the Captains Council for use in the Starbase 118 universe on 20 January 2014.