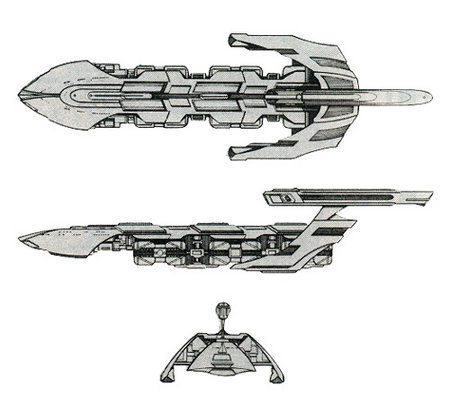 The Class III Neutronic Fuel Carrier, as its name indicates, primarily transports neutronic fuel (ie. deuterium and antideuterium, for use in impulse and warp drives). However, it's also capable of carrying up to 300 passengers, since captains have found they can profitably combine missions to meet starships in need of fuel with passenger runs between planets. Some variants, such as those used by Starfleet, lack most of hte passenger capacity.

Physically, the Class III is an ugly beast. It consists of a relatively narrow central spine, with a bulky Engineering section aft and a small forward "module" containing the bridge and other systems. Attached ventrally to the spine are four enormous tanks for transporting fuel. It has additional cargo holds on board for non-liquid goods.