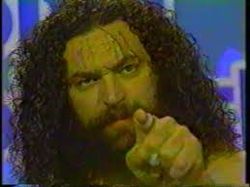 Description Doreg is a tall man, stocky but in excellent physical shape. He has short black hair with a dusting of gray. He is in his late middle years and his face is lined. His nose shows that it has been broken a number of times and his knuckles are also scared. At some time before he arrived on Cart'hen III he had the distinguishing red lines on his forhead cosmetically removed, thus eliminating the final distinguishing mark of his native race.

History Born to an extremely xenophobic race Chalf had a crisis of identity at his father's resolution. That is a cultural ceremony where an individual takes their own life in ritual suicide at the age of 60. Vowing that he would never be that stupid, Chalf managed to get off world. Once off world he worked at a number of jobs, on a number of worlds, before finally settleing on Cart'hen III and taking a job with the Enforcers, a quasi police force in the city of Mith.

He worked his way up through the ranks and is now the Chief Law Enforcer for the city of Mith.