Allen was born on Starbase 143. His father was the Chief of Engineering and his Mother was the Chief of Communications. His Father was thought to have been killed in a shuttle accident, but later came home from an undercover mission to the Rumulan Homeworld. Allen attended school on the Starbase and was a top student in science related classes, while struggling with math.

At the age of 7, the Garrett family transferred to the USS Savannah, where Allen's Father, Commander Jayden Garrett, was made the executive officer of the New Orleans class ship. After a year on the ship, Allen was sent back to Trill to live with his Grandparents.

Allen was put into one of the best schools on Trill, where he succeeded in both math and science. His Grandfather talked him into applying for the Trill Institute for Arts and Sciences, where he was granted admission at the age of 12 under the Exobiology Program.

Allen was always a very active and happy child. He was in many different clubs while in school and attend council meetings for the city he lived in. As such, he would be asked to do research for the city's Prime Minister from time to time.

At the age of 16, Allen left for the University of Trill in the capital. Allen was accepted to the University a year early. He studied Diplomatic Law for three years. When he graduated, he chose to travel to Earth to study at Oxford in the Diplomatic Relations Program. There, Allen learned to play lacrosse and joined the Oxford Lacrosse team.

He met a few Starfleet Cadets while on Earth and thought about Starfleet for the first time, but not seriously.

Allen returned to Trill and became and member of the Trill Trade Union after his time on Earth and was placed on a Trill Trade Ship as a negotiator. Allen worked with the Union for two years. He had become the Chief of Fair Trade and Union Labor when he got a message from the Symbiosis Commission that demanded he return to Trill.

Allen returned home, heading straight to the Commission to find out that he was selected to be joined based on a test he took in early prep school, as well as the education he currently had.

Allen spent six months at the Commission taking tests and being reviewed before he was sent to Betazed to do his field testing with Kaun Jhan, who was then serving as the Trill Ambassador to Betazed. Allen spent a year on Betazed working with the Ambassador. Jhan was very impressed with Allen Garrett telling him that he had a bright future as a Diplomat and very bright future as a joined Trill.

Allen went back to Trill and was joined to the Diaz Symbiont three months later. He soon found that the experience was unlike any other when his spots began to itch all of the time. It took Diaz a few months to adapt to the five new personalities in his head; Brent Diaz, Jadden Diaz, Kazzen Diaz, Masters Diaz and Tannie Diaz.

He returned to Earth after applying for, and being accepted to, Starfleet Academy.

Allen entered the Academy on a Science Specialization Degree track, Majoring in Genetics and Physics with a Com/Ops minor. The workload took a little to get used to, but Allen loved his time at the Academy and made some great friends. Most notable was his friendship with Professor Nuberry in Genetics. The two of them would talk and debate for hours after class. Allen met Jessica Langley and dated her in his last few months at the Academy but they departed as friends as their careers would take them in different directions. Allen graduated first in his class and fourth Academy-wide. Being First in his class he got the honor of choosing his first post.

Allen's first assessment was on the USS Princeton. On his first mission, the ship passed through a charged nebula. He was tasked with its' study. As such, Allen was on the shuttle away mission that went deeper into the nebula. The charged partials passed through the hull of the shuttle and Allen's spots started turning red and burning. The pain got so bad that he had to be medically induced into a comma until the shuttle returned to the Princeton, where the CMO had no option but to surgically remove the spots. When Allen woke up and saw himself, he fell into a deep depression and spent a few months with the ship's counselor. However, the depression seemed to fade away when he noticed that he no longer itched when he ate some of his favorite foods.

After 2 years on the Princeton, Allen was promoted to a Lieutenant and was made the Chief Science Officer. While on the Princeton Allen meet Jack Book, the helmsman. The two became very close and after dating for 7 months they joined quarters. Soon after Jack was killed in a shuttle explosion. The ship had to many memory for him. Everywhere he turned was steel and wood reminders. Allen put in for a transfer, but it was still a long wait.

A year later Allen was transferred to the Midway Repair Facility and was made the Chief Science Officer after a new race of space dwelling bugs were found there by the USS Independence. Allen spent a year studying the bugs until he found a way to relocate them to another part of space away from the station. The Bugs had infested the outer hull of the Station, chewing through the hull and getting into vent shafts.

Allen was made the 2nd Officer and promoted to Lt. Commander after the bugs were relocated. He turned his blue uniform in for a red one.

Spending another year on the station, Allen saw an opening on Starbase 118, and transferred in as an attache to Captain Jaxx.

Ensign Diaz is a fine officer. I feel he is a 'jack of all trades' and close to a master of most. He sees a need and fills it with out being told to do so. All of the department heads seem to like him and value his work. On a mission into a nebula, Ensign Diaz was injured due to an extreme dose of Gamma Proton Ions. They caused his spots to burn and change color. When he was returned to the ship, it was to the point that he needed surgery. I had hoped that he would recover better than he did, but if I was to lose a part of me or my heritage, I would guess I would handle it in about the same manner.

It was with great sadness that I had to relieve Ensign Diaz of duty for missing work rotation and while being on duty not attending to the work at hand. I have placed him in the care of our Counselor, Dr. Hayes. I am not listing this as an official disciplinary act, but rather an unofficial act pending the outcome of the medical assessment.

Ensign Diaz is a very fit Trill, showing great reaction, timing, strength, and movement ability. However, he does suffer from allergies to some foods, abrupt changes in temperature, and certain fabrics used in clothing. I have tried to treat him for these allergies, but no medications have worked thus far. I told him the only thing that we could do was to remove his spots and he rejected the idea and treatment.

However, while on a mission into a dense nebula, the Ensign came into contact with the strongest ever recorded Gamma Proton Ions. These particular Ions had a temporal wave signature to them.

These Ions affected the Ensign so bad that he was put into a coma. When he was beamed back to the ship, the skin around his spots looked to be breaking down and was burning the surrounding tissue like an acid would. My only action was to remove all of Ensign Diaz's spots. I then repaired and regenerated the skin and tissues. I feel that this was the only way to save his life. If the spots had not been removed the Gamma waves would have eaten into the skin and most likely would have hit the bone.

Ensign Diaz first reported in as he boarded the ship for duty and then a few weeks later for his allergies. The next time he was seen was when he was brought into sick bay for surgery.

Ensign Diaz, has always been a very happy and upbeat officer, often going out of his way to greet others and talk with them to make sure they feel welcome. The Ensign is a strong Officer and is emotionally stable. After his surgery, he stopped talking with others and kept to himself. He also started sleeping through all of his off duty hours and missing counseling sessions. He then started missing work. With the agreement of the Captain, we placed the Ensign in Sickbay and did full rehab therapy on the Ensign. I am pleased to say that the Ensign has made a full recovery and is cleared for duty. 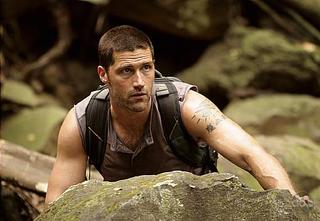 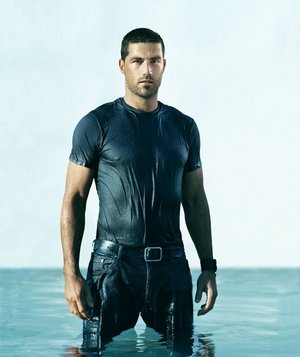 Allen Diaz on an away mission