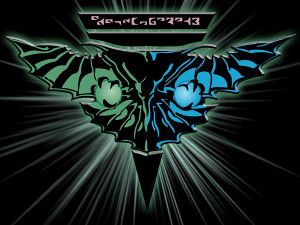 mnekha: correct, right; excellent. (superior to inferior, or between equals).

The following insults can be used either alone, or in sentences, or following "hwiiy", which means "you are":

Rihannsu: a group of Romulan people

Khe'lloann'na: a citizen of the Klingon Empire

Lloann'na: a citizen of the UFP

Ssuaj.: I understand. (non-formal, common use)

H'ta-fvau.: Return at once (to last position).

Hallh'na.: Report to me at once.

The following are the cardinal numerals in Rihan:

Numbers from eleven to ninety-nine are formed in a regular manner as illustrated by the following examples:

Numbers from 101 to 999 are also formed regularly:

The word for "thousand" is dhei. Its use is quite regular, too, however its regularity is quite different from English.

The illustration above may give the impression that dhei functions almost identically to English "thousand", however, this is not the case, as its function is to represent any group of three zeroes. Millions and numbers larger are also expressed using dhei, like this:

It can be noted above that "one million" is formed as "two dheis" - meaning something akin to "one two-groups-of-three-zeroes", which is exactly what a million is - a one followed by three zeroes. Further examples follow:

Fractions are formed with the particle erh', with the denominator first, for example seha erh'lli means "seven thirtieths."

Adverbs indicating a number of occasions are formed regularly with the prefix caehh'-, with the exception of "once", which is joaie. The others are all, however, formed regularly: caehh'kre, "twice", caehh'kru-kra'kre, "222 times", etc.

The Rihannsu, as the records of The Arrival state, were extremely lucky when they stumbled upon the Eisn system. The ch'Rihan/ch'Havran pair revolve around Eisn in a very stable orbit, a few degrees off from the 'horizontal' plane. There is very little wobble in their path, and it is less elipsoidal than the Terra/Luna pair which results in less drastic season changes throughout the year.

The two bodies orbit Eisn once every 380 days, as per ch'Rihan's day cycle. Being a decimal (base-10) oriented culture, the day was broken into hours, minutes, and seconds based on factors of ten. In order to maintain some consistency with existing time standards carried from Vulcan (they wanted a 'second' to approximate what they were used to as much as possible), the day was broken up thusly:

Empirical time is constant throughout the Empire, based on the offical clock as positioned in the Empire's capital, Ra'tleihfhi, on ch'Rihan. There are no timezones, however other occupied planets do maintain 'local times' based on the particular planet's orbital/time system. All clocks and time-display devices are synchronized to Empirical Time as well however, to assure consistency.

As with most cultures that divide their year into 'months' based on seasonal patterns or orbitting bodies, the Rihan Month system is based on the orbital path of the ch'Rihan/ch'Havran pair, which completes a full cycle every 20 days. Therefore, the Rihan year is divided into 19 months, each consisting of two ten-day 'weeks'. Since seasonal changes are minimal on the homeworlds throughout the year (a fluctuation of +/- 12° celsius on average between their 'winter' and 'summer'), months are determined by the orbital path of ch'Rihan's sister-moon, ch'Havran, and where it appears in the sky. The first week of the month, Eisn appears higher in the sky than ch'Havran, and lower in the second week (coincidently, using Eisn as reference from ch'Havran, the same holds true on ch'Havran: Eisn will appear 'higher' in the sky than ch'Rihan, and vice-versa). The first day of a new month is easily noticed on ch'Rihan's capital city, since it involves a partial eclipse that lasts a couple of hours during the day. The months and weeks are named thusly:

Dates are written in the format of: 'Nth day of [month]-[high/low]Eisn, year AS (After Shipfall)'; there are three ways to write the date -

There are four regular declensions of nouns in Rihan, one for proper nouns and three for common nouns.

Note, that before the -su or -su'ri suffix, a final 'n' or 'm' is doubled. There are some special prefixes used only with proper nouns. These prefixes cannot be used with common nouns. Common nouns - that is, everything besides proper names - fall into three groups, based on the ending of the root (Nom-Acc) form of the verb. Common nouns are declined as follows: Group I Group II Group III

There are a small number of nouns in common use that decline irregularly. These are:

Nouns can be derived from other words in several ways, notably

There are a number of other affixes that can be used to form new nouns; these are generally affixed to other nouns, but can be added to other words too, sometimes: