"Fear the change. It must be stopped."

The Zalkonian are a species who prefer to be isolated and left alone. They will use force if needed and their efficient government ruthlessly hunts down all those who rebel, who show signs of the change, the next step in their evolutionary process. Fear seems to have taken hold, rationality thrown to the winds or why else would they hunt their own people.

The Zalkonians expressed a desire to continue to be isolated from out side contact with other species. This was in 2366 during their first contact with the Federation.

At this time many Zalkonians had begun to undergo the process of evolving in to non-corporeal life forms. The first sign of a Zalkonian turning into a non-corporeal entity is when they start to exhibit painful isoelectric bursts. The Zalkonian people were frightened by those undergoing the change and their government began exterminating anyone showing symptoms. Some of those affected fled their home world but were ruthlessly pursued by the Zalkonian military.

In 2366, the USS Enterprise-D discovered a crashed Zalkonian escape pod, and rescued one survivor. This survivor exhibited almost complete memory loss and was named "John Doe" by Doctor Beverly Crusher. "John" began to undergo the symptoms of the change while on board. The Enterprise was intercepted by Sunad's ship. Sunad demanded John's return, but Captain Jean-Luc Picard refused to turn John over without an explanation as to the nature of his crimes. Sunad attacked the Enterprise, but John stopped the attack. Now that Sunad posed no danger to him, John finished his transformation and returned to his home world to help those undergoing the change do so in safety.

Now their is a small but growing faction of rebel non-corporeal Zalkonians who seek out and attempt to protect those about to or who are going through the change. While they try to avoid taking lives they will if needed to protect those under going the transformation. This has resulted in increased government oppression and panic among the civilian population.

Approximately four years after this first contact, it appears as if some Zalkonians were involved with the Maquis on Volan III. Very little is known what they were doing as the Maquis did not keep any records of their activities.

They did establish an embassy on Duronis II but when the Romulans occupied that planet they were expelled. Once the Romulans left following the destruction of the Hobus star, the native Laudeans re-established their own government. However the Zalkonians have not yet been invited to return and reopen their embassy.

They have a very repressive government that due to fear and misunderstanding seek to destroy all those who are undergoing the incredible metamorphosis into non-corporeal creatures.

They are a humanoid race distinguished by multiple horizontal facial ridges on their foreheads. Males tend to have short dark hair and females will wear it longer to about their shoulder length. They seem to prefer clothes that are a pale in color with creams, white and pastels being the predominant shades. 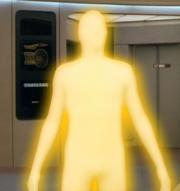 A fairly advanced humanoid physiology with fewer cases of disease or other ailments than are normally associated with sentient species. A very small minority are either close to or about to undergo the change. This is a metamorphosis from a solid living humanoid into a non-corporeal creature. The first stages of this change is when the subject starts to experience isoelectric bursts.

The picture to the side shows a Zalkonian who is undergoing the change.

They suffer from many of the classical mental illnesses that other advanced species suffer from. In particular a deep fear and panic whenever someone starts to undergo the transformation from humanoid to non-corporeal life form.

As a species they may not be xenophobic but they do tend to avoid contact with other species. This has not prevented them from exerting a strong military presence over what they consider to be a logical protective zone around their home world.

Due to the isolationist attitudes that they have as a species very few individuals have ever been allowed to visit their home world. Those that have, have been shadowed, monitored and guided by the planetary security forces to ensure minimal contact with the population. This has resulted in their being almost no recorded data regarding their religion.

This propaganda campaign includes signs, banners, written material, broadcasts, skits an word of mouth. So far it seems to be working as the general public is terrified and panicky over the possible dangers these curse individuals may present.

They have a repressive society where the people fear differences and will turn in anyone who seems to be suffering from the first stages of the change. This is encouraged by the government through an intensive advertisement campaign and increased internal security. Cameras, drones and security agents are every where, constantly watching.

Due to the isolationist attitudes that they have as a species very few individuals have ever been allowed to visit their home world. Those that have, have been shadowed, monitored and guided by the planetary security forces to ensure minimal contact with the population. As a result, while it is known that they have a wide range of artistic art forms there are not a lot of visuals or recorded data available to examine. It may also be true that these are practiced with in a set guide line of rules and expectations.

Due to the isolationist attitudes that they have as a species very few individuals have ever been allowed to visit their home world. Those that have, have been shadowed, monitored and guided by the planetary security forces to ensure minimal contact with the population. This has resulted in their being almost no recorded data regarding their customs.

They have limited interstellar technology but advanced weapons technology on par with the Federation. Among their technology, Zalkonians have developed a projectable paralysis field that can strangle the crews of nearby vessels. One of the main areas of research that is now receiving maximum funding is the search for new and better ways to sanction or terminate anyone going through the transformation. This includes research in how to deal with those who have completed the change into a non-corporeal creature. They are also seeking to enhance their ability to scan for and detect the first stages of the transformation

They have a fairly self sufficient economy. This is good because they tend to be almost xenophobic and avoid contact with other species. This does not stop them trading with other species, especially any that are obviously at a disadvantage militarily compared to them. 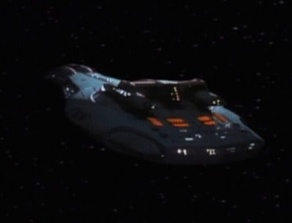 They have a strong military with a surprising number of ships considering the size of their civilization. What is even more surprising is the size of their planetary security forces. It is massive, especially when you consider that they act more like military and secret police than true soldiers.

This cruiser is the main stay of their fleet.

Information was obtained from Memory Alpha and Beta as well as the TV episode TNG: Transfigurations.

This file was updated and approved by the SDC on 12 October, 2012

Content from this article may have
come partially, or entirely from
Memory Alpha
Retrieved from "https://wiki.starbase118.net/wiki/index.php?title=Zalkonian&oldid=236955"
Categories: