The Voth are a highly advanced bipedal saurian species of repitilian descent. Thought to have originated from Earth (Sol III), they are considered the first sentient species native to the Sol System by about 400 million years. Evolved from the Earth's ancient Hadrosaur, which in turn had evolved from the Eyros, the Voth are the cold-blooded cousins of the Terran race. 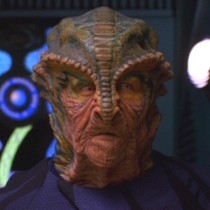 With three clawed "fingers" or manipulatory digits on each hand and a height slightly taller than an average adult human, the Voth are a humanoid species. The Voth also have a better sense of smell than most humanoids species, a sense which is regulated by an olfactory centre named the 'dilutus lobe', as well as great physical strength. They possess heavy boned brow ridges that form a central crest rising to the back of the skull as a conical protrusion. It appears that the wide of diversity of the Voth's individual skin tones and colours are analogous to the variations of other species hair and eye colors. These shades range from green to yellow, ochre and brown.

The Voth have great control over their metabolisms and certain other biological systems within them. When cornered, they can deliberately lower their heart rate and body temperature, to entered a form of protective hibernation or stasis. Also, they can communicate non-verbally through vasodilation, a process in which blood vessels are temporarily enlarged to facilitate a higher rate of blood flow. This compensates for their lack of the diverse facial expressions that are used by many other humanoid species to display emotions.

Although the Voth possess a number of inhabited colonies and worlds throughout the Delta Quadrant, they live also in huge spacefaring vessels known as "city-ships". Complete with transwarp drive and spatial displacement cloaking device, these vessels even possess their own council chambers from which the Council of Elders can govern.

Along with the "city-ships", the Voth also have a number of scientific starships. Their institutions for science, research and education are called "Circles" (e.g.: the Circle of Archaeology, the Circle of Science and Philosophy, the Circle of Exobiology).

The Voth may possess an innate self defense mechanism, although this may be the result of a manufactured wrist weapon instead. In Distant Origin (VOY), a Voth shoots a small, fast-acting chemical covered quill from an orifice on his wrist at Commander Chakotay, causing him to be rendered unconscious.