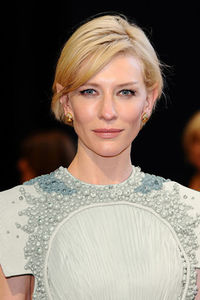 T'Vara, a prominent Varanite and High Priestess of their order.

The Varanites are a Vulcan ethno-religious group that currently reside on the colony world of Vulcanis. Pre-dating Surak by over two centuries, the Varanites were among the first to seek the betterment of Vulcan society by purging their negative emotions. Surak apparently spent time among them but it is debatable on how much they influenced his philosophy. Surak's line "Cast our fear. There is no room for anything unless you cast out fear," is a well documented Varanite training axiom and a slight variation predates Surak's original writings. Varanite themes of beauty also permeate Surak's writings, but these interpretations have always been controversial. Regardless, the Varanites were among the first to hear the call of Surak, but found it wanting and too extreme a purge of Vulcan vibrancy that had led to great conflict, but could also lead to greater things in their eyes. Using Surak's philosophy as a way point, they turned their attention towards finding a balance between logic and emotion. Their embracement of Vulcan mysticism and the occult also earned them quite the reputation. They, more than any other Vulcan sect, devoted themselves to the study of the limits of their species' telepathic abilities, which led to their isolation from Vulcan society as the years went on.

As melding and telepathy in general became a distasteful practice on Vulcan as the centuries went by, Varanite communities came under increased scrutiny that later turned into active prejudice and discrimination, in spite of their isolation. In the mid 16th century, the Varanites chose to voluntarily go into exile, colonizing the newly discovered planet Vulcanis. Different Varanite communities dot the surface, no more than a few thousand in each group, regularly exchanging people, knowledge and some say even Katras every 30 or so years to spur new ideas and prevent inbreeding. Little of their philosophy and culture is known beyond what is written in ancient texts before they left Vulcan. Their communities are typically in extreme locations and they typically avoid contact with outsiders, save to offer aid and assistance.

Among the various speculations about the Varanites, it has been suggested that they live longer than the average Vulcan (or are at least more youthful)and have some sort of control over their body chemistry. It has been hypothesized that by not bottling up their emotions, the lack of associated stress allows them to live longer (if not healthier lives). Many Vulcan offshoot races have longer lifespans but it is unknown if the same can be said for Vulcans who do not follow Logic, even Varanites.

Varanites do not reject Surak's teachings, nor do they see themselves in opposition to its ideals. They see Logic and the untamed emotions of their ancestors as two extremes of existence, and that there must be a golden ratio between the two. Like followers of Surak, the Varanites try to purge their negative emotions in pursuit of an enlightened state of existence. Where Surak's followers use exercises in Logic, Varanites use telepathic exercises in pursuit of the serenity and clarity needed to unburden themselves with their more extreme emotions. The exact process is mysterious but through existing Varanite texts the process seems to involve pushing their negative emotions to a singular space in their mind and then drawing them out, like a toxin and letting them leave their bodies. It has been hypothesized that they transfer these negative emotions in a modified Katra ritual, taking only the negative parts of themselves and putting it elsewhere, though where exactly is unknown. Detractors say that excising negative emotions is a shortcut on the way to enlightenment, but the benefits from this ritual are unquantifiable in the eyes of many and take far more mental discipline than even a typical Kolinahr master.

The amount of telepathic control and esoteric knowledge needed to accomplish such a feat has fed thousands of years of speculation on the Varanites, ranging from the benign to the macabre and outrageous. Few ever leave the movement and even fewer leave its philosophy behind, though they periodically send their people to help when disaster strikes.

The Varanites value life in the extreme, but believe that there is a balance to be had. Like followers of Surak, they do not lie or kill, save in defense of another (never in the service of their own person as that would be selfish, a negative emotion) but are shown to be incredibly proficient warriors. It is said that with a flick of their wrist, a Varanite can execute a lethal nerve pinch in what seems like a fraction of a second. It is unknown if such reports are true as few ever seek to harm them.

The objective of Varanite training and existence is said to become serene and kind, exhibiting an otherworldly and calm persona. Where normal Vulcans are cold and stoic, the Varanites are compassionate and mystical. Their philosophy is considered a lifelong pursuit and their technique is not considered to be perfect or complete, much like Logic itself. Negative emotions may yet still arise, but the Varanites work hard to keep their enlightened persona. Since they do not repress their emotions as other Vulcans do or run on Logic, they are less prone to catastrophic mental breakdowns that result in errors in Logic or when their emotions break through.