Content from this article may have
come partially, or entirely from
Memory Alpha

One of the primary offensive tools of a Starfleet ship is the torpedo. As of 2397, there have been five primary types used through it's history, with the current main two being the Photon Torpedo and the Quantum Torpedo. Other types have been used as mission requirements dictate.

This article is a brief overview of torpedo technology and it's history. For more detailed information, we recommend this article located on Memory Alpha: Torpedo

The first torpedo used by the Starfleet when it was the military of United Earth in the 22nd century[1]. This torpedo boasted a explosive yield of 250 tons of TNT, and was still an atomic weapon.

The precursor to the modern photon torpedo, this saw first use in 2153[2], and while it's yield was the first to be customizable. it still had issues penetrating deflector shields. 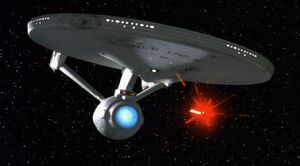 A Photon Torpedo being launched by the USS Enterprise

The mainstay of Starfleet, Photon Torpedos continue to be used as late as 2397, over a hundred and sixty years from first development[3]. The range steady increased from the 300,000 km range to 3 million km range as of the Akira class. The following is a brief overview of classifications 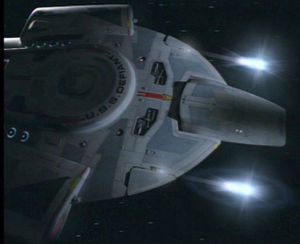 Defiant launches a pair of Quantum torpedoes; served as the development testbed for these weapons prior to their installation in the Sovereign class.

The Quantum Torpedo was first rolled out in 2371[6],as part of the Advanced Defense Initiative, and represented an evolution in torpedo technology. These torpedoes, which rely on zero point energy systems, were first deployed on the Defiant class and Sovereign class starships, but were gradually rolled out to the fleet, as attack fighters were capable of using them as seen during Operation Return, in what is sometimes called The Third Battle of Deep Space Nine. It is known that other major powers had the same technology, with the Cardassian Union using them onboard one of their vessels[7].

A rarely used torpedo type (and technically a missile, albeit one that could be fired as a torpedo), tricobalt were only sometimes carried by Starfleet ships, and used when higher yields were called upon.