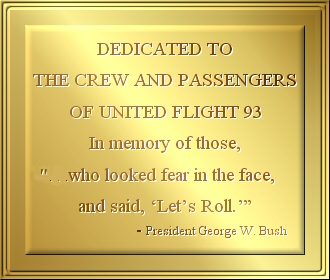 Dedication to: The Passengers of Flight 93

United Flight 93, the fourth terrorist attack plane on September 11, 2001, crashed near Shanksville, Pennsylvania when passengers foiled the terrorist plot on September 11, 2001. The passengers aboard doomed flight were able to learn of the attacks on the World Trade Center and the Pentagon, and determined it is no mere high-jacking “The people who died in Pennsylvania fighting for control of United Flight 93 on September 11, 2001, don‟t need a new memorial,” said then President George Bush. “In very real sense, they already have two memorials: We call them The White House and the Capitol Building.”'“Every time you see those white pillars or that gleaming dome,” the president said, “remember the 40 Americans who volunteered in a moment to defend freedom with their own blood. Remember the ones who looked fear in the face and said, "Let‟s Roll.'"