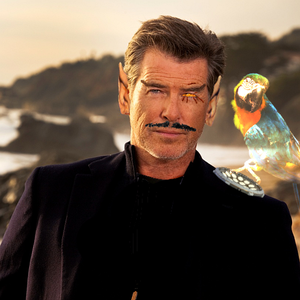 Snorlan is a Vulcan pirate operating in the Shoals. He is said to be on the search for the pirate Silas Finley.

Snorlan has a thin well manicured moustache, in the tradition of Clark Gable. He tends to also keep his fingernails perfectly manicured.

After a violent fight with an angry mohawked Andorian, Snorlan lost his left eye, and in its place was implanted an ocular device, which is surrounded by scars in his skin. He also lost part of his shoulder, which was replaced with an embedded holographic projection device that projects "Arty", a transparent and colorful holographic AI parrot. A parrot was selected by Snorlan as he considers himself to "have a weakness for the Earth classics".

Snorlan is confident and suave. He detests Humans and considers them "filthy". He also considers Klingons to be "dirty".

As a Vulcan, Snorlan had learned as a child to contain his emotions. In his adult years as a rogue however, he learned how to let his emotions out. This allowed him to become successful as a pirate. He is prone to losing his temper.

Snorlan is the Captain of the SS Pon'Fire. He claims that he "had to trade many slaves to acquire" the ship, and trade "many more" to have the sides of the hull decorated with flame decals. His crew is instructed to refer to Snorlan as "Your Grace".

Snorlan has manifested a way to hack into subspace relays, for the purposes of long distance subspace communication. This "backdoor" has helped him gain some of the power and contacts he has managed to gradually acquire over the last decade in the Shoals.

If Snorlan knows the approximate location of a ship or individual, he is able to leverage Starfleet and Colonial Coalition communication assets to contact them at long range for a limited time, until he is ejected by the subspace relay's control systems. He has heard rumors that officials are still trying to investigate and determine who is using the relays, which he is proud of.