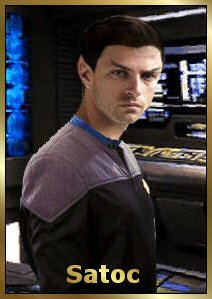 Satoc is contemplative and reflective to the point of near reclusiveness. He is very philosophical and introspective, which can come off as arrogance and indifference. Satoc is deeply committed to logic and the resolution of a fundamental logical paradox that has plagued him since young adulthood. It is hard for people to break through Satoc’s outer shell. Most of his acquaintances are just that – acquaintances. Many people are put off by what often appears to be a wall of cold logic. Those that have the patience and determination to break through Satoc’s outer shell, however, find a very deeply committed friend, who despite the Vulcan loathe for emotion, find that he is very dedicated to those few he has grown attached to.

Like all Vulcan children, Satoc was trained to control his emotions through logic and meditation from a very early age. Upon completing primary schooling, Satoc entered the Vulcan Science Academy where he developed an intense interest in non-Vulcan cultures. He graduated on stardate 238007.17 with a doctoral degree in Cultural Anthropology after conducting extensive fieldwork among the Galipotan people. Soon after graduation he accepted a position teaching Cultural Anthropology at the Argelian College of Science.

Satoc’s studies instilled in him a concept of respect for other cultures and appreciation for cultural differences. The significance of this perspective created a logical problem for Satoc. If all cultures should be valued and all cultural differences appreciated in all forms, are there no universal principles? And if there are in fact universal principles, then can all forms of diversity truly be valued, even the ones that do not value what one holds to be universal principles? In an attempt to resolve this personal paradox, Satoc underwent the Kolinahr ritual around stardate 238204 to fully master his emotions and find clarity in pure logic.

Finding that the pure logic of Kolinar provided no real answers to his dilemma, Satoc concluded that he would join Starfleet in an attempt to experience a wide array of cultures and viewpoints. He gave up his professorship and applied to Starfleet Academy where he was accepted into the Science Program. He augmented his background in Anthropology with a study of general physical science and starship operations. Through broad exposure to different cultural backgrounds that a career in Star Fleet will afford, Satoc hopes to resolve his personal questions and find peace in a logical solution.