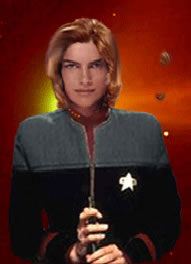 Civilian Robin Phoenix is currently a visitor aboard the USS Ronin, after being discovered floating around space in the shuttlecraft Trafalgar

Born on stardate: 235605.21 in the city of Zwolle (continent of Europe) Robin was the first and only child of the Phoenix family. His father has his own clothing store while his mother managed her own flower shop. Both parents play various musical instrument and have a great interest in science. They still play in theaters and other houses of the art all over Federation teretory.


When Robin Phoenix was at the age of five the family took a trip to Adigeon Prime to take part in an experiment on Humanoid Brain Enhancements. The development of this new technology was based upon similar technology already in use on Adigeon Prime. While his parents observed the experiment they didn’t have their eyes on Robin for an instant. During a critical phase of the experiment Robin was hit by an energy discharge formed by a malfunction of the primary energy core. As a result the HBE activation beam influenced Robins brain. As a result his mind started to develop empathic and telepathic abilities. At the current time his empathic abilities and telepathic abilities can’t be put on a scale, however… tests results dictate these abilities are evolving . It is unknown what the future may bring Robin for his mind continues to enhance. Federation scientists are puzzled by this matter and have no remedy, however they seem to be convinced Robin Phoenix is stable at this time.


When Robin came to the right age he decided to join Starfleet and explore the galaxy to continue his quest for knowledge.


He recieved his first assignment as counselor aboard the USS VICTORY on stardate 238007.13


On stardate 238008.04 he went on his first mission. It resulted in the kidnapping of Nugra, his Gorn college, and himself. The mission therefore failed*.

On stardate 238010.19 he joined an away team on a rescue mission boarding the Federation vessel USS Nokia, an Ambassador class ship which assisted the USS Victory during repairs and the battle with an enemy and experimental ship containing an alliance between some Klingon, Cardassian, Romulan and Breen officers. During this battle the Nokia almost got destroyed and many Nokia crewmembers died that day. Together with the Nokia EMH, Robin rescued an unborn baby just after the mother died. Robin promissed the woman ,on her death bed, to take care of the child. After the mission he returned to the Victory with the baby, Danny. During shoreleave on SB118 after the mission, Robin's parents adopted Danny and took him to Earth.


Stardate:238012.18
Engaged into a new mission and was assigned to Commander Avatar's awayteam to beam over to a Klingon Bird of Prey. At that time the mission continued back onboard the Victory fighting of the Lycanthropes who board alien vessels to add crewmembers to their race. This succeeded, Robin Phoenix then assisted in sickbay during the ending of his second mission.


Stardate:238103.17
Doctor Parker lost her unborn child due to a failure involving Mr. Anderson's Borg implant. Robin was ordered to guide both Anderson and Doctor Parker through these difficult times.


Stardate 238104.26
Embarked on a rescue mission under Commander Parker's command but returned to Victory because of an attack by an unknown species haunting the planet's system keeping the Nebula-class colony vessel New Hope in its grasp. Phoenix was injured during this mission and transported back to the Victory under orders of Megan Parker. During his "deep sleep" caused by the energy entities inhabiting the system, the counselor was able to talk to them through telepathy. Afterwards he tried contacting the species again under the supervision of Commander Stevok. It succeeded and more information was obtained as was a cease fire between Victory and the species.


Stardate 238106.08
The mission is over, alos thanks to the cargo-vessel Dromi all the colonists were saved from a certain death.


Stardate 238106.17
The Colonists were transfered to the Federation vessel USS Hood. Afterwards the USS Victory set course to Starbase.


Stardate 238108.23
USS Victory engaged into a new mission. The ship is heading for Qo'noS, the Klingon homeworld. It seems the Cardassians seek an alliance with a house which just entered the High Council. Such an alliance could be dangerous for both the federation and the Klingon empire. Victory has orders to search and locate the meeting spot, capture both parties and deliver them to the proper athorities.


Stardate: 238202.04
During a scientific mission inside the Dyson Sphere, Robin was invaded by an alien entity. This appeared to be a Queen, one of the former rulers over a large part of the Dyson Sphere. She took control over his mind and body in an attempt to destroy the Victory so she and her King ruled the Sphere once more. The Victory crew was finally able to defeat the evil King and Queen, but for Robin help came too late. His body had been altered on sub-atomic levels, Starfleet does not have the medical knowledge and technology to turn Robin back to his old self. As a result he now spends his days as a female member of the crew instead of male. Details are classified.


Stardate 238205.10
USS Victory sets a course to rendezvous with the starship USS Columbia for a joint mission, which is still top secret and unknown in detail to the crew. Mission was completed at 238209.12, see mission history for details.


Stardate 238209.13
USS Victory sets course for Tanuga IV to drop of a Tanugan science team who completed a scientific survey mission. Shoreleave was cancelled when it became obvious a virus had been taken from the surveyed planet, threatening the billions of inhabitants on Tanuga IV.


Stardate 238212.20
Commander Phoenix' team incl. Commander Nugra (Gorn), Ensigns Wadham (Human) and Fanel (Human) has engaged a trap to capture Plaiax and his evil do-ers. This is hopefully the final chapter of this mission. Mission was a succes.


Stardate 238301.01
Gained field status of CO as the investigation for the missing Captain Hurne continues.


Stardate 238301.07
Orders to set course to Galorndon Core near the Romulan Neutral Zone to rendezvous with CAL Avatar of the USS Columbia are given. All investigations on Captain Hurne are ordered to be put to an end by Starfleet Command.


Stardate 238403.30
Captain Robin Phoenix is forced to resign as CO of the USS VICTORY as a result from her transporteraccident during which she severely lost her body mass and size. As a result, the USS VICTORY is being decommissioned.


Stardate 238502.13
Captain Robin Phoenix is rescued by the crew of the USS Ronin after being found at drift aboard the shuttlecraft Trafalgar.