"We are the children of the gods. Remember that."

The Retellian are a humanoid species with unusual religious beliefs, they believe they really are the children of the gods, created by the union of deity and primitive humanoid. This resulted in their evolution into their current genetically superior form.

They evolved on an average class M world with oceans, deserts, mountains, swamps, forests and vast rolling plains. At first they were nomads, then they established communities, growing in knowledge and skill. It was during this period of their history that the Prime families came into being.

This constant state of armed aggression against all outside forces and the other Prime families lasted until the advent of the industrial revolution. At this time things started to change. New skills and knowledge allowed them to feed more people with less work, to gather more raw resources and to produce better products at less cost.

However this period of enlightenment was rapidly drawing to a close, tension was again rising between a large number of the Prime families. It was only a matter of time before war exploded out between them again.

It was at this time that an alien ship crash landed on a large island off the coast of the largest landmass. Its affects were felt many hundreds of miles away and the closest three Prime families sent teams to investigate the strange clouds of black smoke rising from the island.

Two of those teams were wiped out and only a few members of the third team managed to escape. They reported seeing a massive metal structure protruding from an enormous crater that had replaced a community of a couple thousand.

The call went out and troops were gathered, equipped with the newest and best weapons available and then quickly sent to the island. The fighting was fierce, brutal with no quarter given or asked for. Hundreds of soldiers died, many at the hands of strange beams of energy.

Eventually after almost 3 weeks they were able to hunt down and destroy all of the strange alien creatures who seemed to have arrived in the metal structure. It was only after they had a chance to examine it that they realized it was some kind of ship, one that must have come from the stars.

It took them almost a hundred years of study, examination and experimentation but by the time they were done they had achieved close to 700 years of technological advancements and in some cases even improving on some of the alien technology that they had acquired.

During this time the way that the different Prime families expressed their aggressive tendencies towards the other families slowly changed. Warfare of all kinds was abandoned and replaced with assassinations, kidnapping and blackmail as the obvious means of achieving vengeance, co-operation or victory against a rival family.

By the time they had finished this extraordinary leap forward in technology they could venture to the stars and they did, establishing contact with a number of different alien species.

At some date previous to September of 2152, a Retellian freighter attacked a Kriosian transport and kidnapped Kaitaama, a member of the royal family.

They are ruled by a council of nobles with three representatives from each of the noble families. These families are called the Prime families and between them they own almost half of everything on their world.

There is a lot of infighting between various families, alliances going back and forth and deals, power brokering and blackmail all being considered acceptable political devices to be used to influence votes from the other Prime families. So are kidnapping, assassinations and other unsavory acts.

Most Prime families are fairly large with many having as many as a couple thousand members and a few being so small as to number only a few hundred members.

They have tan Caucasian skin and style their short hair into several small ponytails at the back of their heads. Their facial structure has several ridged sections, and their chin comes to a decreased point. Their nostrils are minutely extended outward on the top of their lips.

As a species they tend to be fairly stable mentally with few known cases of mental illness except for dementia which seems to affect well over 65% of their senior citizens. There seems to be no treatment for this condition and most individuals who suffer from it are either placed into special medical facilities that most experts have deemed inefficient and barbaric, as they serve more as a holding cell in which to warehouse those suffering from mental illnesses, or they are transported to a few small islands far from the mainland and released to survive as best as they can by themselves or with others in their condition.

It was due to the influence of the gods and goddesses that they evolved to be as they are. Even the working and warrior classes of people owe the gods for making them better able to serve the Prime families who are obviously their genetic and intellectual superiors.

Every Prime family has their own set of myths, tales and legends regarding the deity that founded their family. Every single member of the family as well as every single warrior who has sworn allegiance to the family is expected to know and have memorized each and every single one of these stories.

They have three classes of people. The Prime are members of the nobility, leaders, intellectuals, artists and those gifted with the genetic superiority granted by the gods. They make up about 7% of the entire population.

Next are the warrior class who supply the body guards, soldiers and naval personnel for their ships. They make up about 18% of their population and have all taken oaths of loyalty to serve their Prime family until death.

The workers are the largest class with over 75% of their entire population and are responsible for doing everything from working in the mines, on the farms, in the factories and in the various different trades, businesses and occupations available in their society.

Most members of the warrior class tend to prefer athletic competition both as participants and observers over the other forms of artistic expression. This does not stop them from enjoying music or visual arts as well. The working class enjoy music more than anything else and while some of them also enjoy watching the various athletic competitions or the other forms of artistic expression, it is music that they love the most.

This is the term used when a member of the working class or the warrior class has demonstrated that they are better than those around them. This could be due to intelligence, skill, performance or by deed. These individuals are deemed worthy and are quickly selected to marry a member of one of the Prime families.

While they do have a few jointly owned and operated research and development facilities the vast majority of them belong to individual Prime families who foot the bill for their operation and reap the benefits of any and all new discoveries.

Strangely enough this bizarre system has allowed them to keep up with the less advanced member species in the Federation.

They have managed to establish a wide ranging economic trade system that has allowed them to greatly increase the quality of life for all of the Prime families. In fact their trade system is extensive enough that not only does the warrior class get to enjoy many of these goods as well but some of the imports even make it into the hands of the worker class.

A Retellian freighter was a type of freighter used by the Retellians in the 22nd century. They were designed to operate with a mere crew of two: a pilot and an engineer.

The layout was composed of a primary spinal section, with six cargo bay sections, three on each side. Inside, the cargo bays were all separated from each other, connected by the central core of the ship. Each cargo bay had access to a series of Jefferies tube-like access ways, and partial access to internal sensors. Access to internal sensors could also be achieved inside one of the access tubes, which also led to the shuttlebay, which contained two one-man escape pods.

The freighters maximum speed was about warp 2, but ambitious captains could get it to go to warp 2.2. Its thruster assembly was two symmetric triangles on its aft section. Although normally thrusters firing weren't visible except for a small yellow glow, when the thrusters were firing at full power a strong yellow glow could be seen.

Two protruding sections below the thrusters were warp nacelles, which could take heavy damage, to the point of making an enemy believe the ship had been disabled, and still function. Two protruding ports above the thruster packs were similar to Bussard collectors, and in the event of an emergency could release substances such as ionized pyrosulfates and dilithium hydroxyls.

In 2152, a Retellian cargo ship under the command of Firek Goff rendezvoused with Enterprise when the stasis unit which held a kidnapped Kaitaama, First Monarch of Krios Prime began to malfunction. 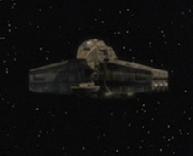 Their freighters have been enlarged over the years but for the most part they still tend to operate with small crews of between 5 and 10 with the same exact number of security officers being assigned to each ship. These security officers serve the Prime family that own the ship and are charged with protecting it and its cargo.

Older freighters have been sold off to some members of the working class and as a result these ships do not have any security officers serving on them. Most of these vessels are much slower and tend to be at least 75 to 100 years old.

(add a pic of the freighter from alpha)

The Retellian escape pod was a type of small escape pod used in the 22nd century to safely evacuate Retellian freighters in the case of an emergency.

Each and every single Prime family has their own loyal guards and soldiers who provide protection as body guards to the members of the family and when needed to their ships and property.

While these soldiers may be used against another Prime family or any alien species they are never used against the working class. This is considered a horrible waste of natural resources.

While every single Prime family owns and operates a number of armed freighters only the richest families also own and operate real warships. These are both a sign of their power and affluence. These ships come in a wide range of sizes and capabilities as they are built to the requirements of each individual family.

The largest such fleet owned by a single Prime family has a heavy cruiser, 3 light cruisers, 4 destroyers and 6 frigates. The smallest fleets will have only a single ship and it could be as small as a tiny patrol vessel. Some Prime families do not own or operate any warships either because they cannot afford to or because they do not wish to waste the funds.

In 2151, Commander Charles "Trip" Tucker and the Kriosian First Monarch Kaitaama used a Retellian escape pod to flee from Kaitaama's Retellian captors. Eventually, they landed in a swamp on an unnamed planet and were rescued by the Enterprise NX-01 the next day.

In 2154, an unnamed Retellian was manhandled by an Orion guard during a slave riot on Verex III.

Both Memory Alpha and Memory Beta were used as references as well as the following TV episodes, ENT: Precious Cargo and ENT: Borderland.

Content from this article may have
come partially, or entirely from
Memory Alpha
Retrieved from "https://wiki.starbase118.net/wiki/index.php?title=Retellian&oldid=237069"
Categories: