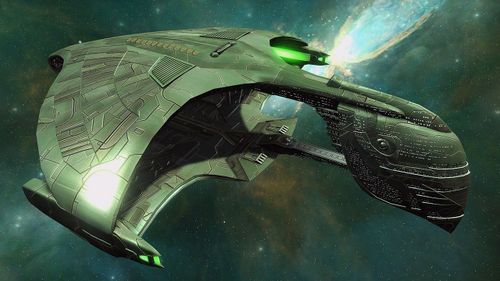 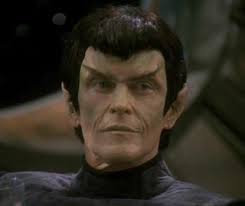 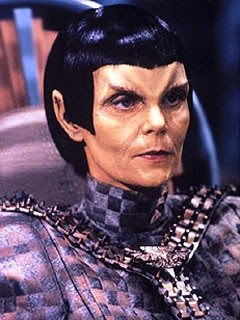 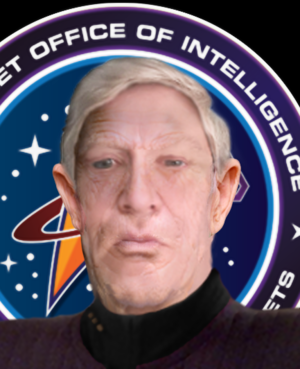 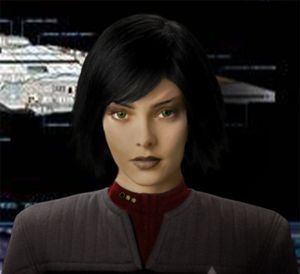 R’Val was born on Romulus to a prominent military officer and son of an Imperial Senator, and his wife who was quite successful as a ship commander herself. This enabled R’Val to be able to study at the Imperial Military Academy where she excelled. Her rise through the ranks of the military was quite fast, although others have progressed faster. She eventually assumed command of a B-type Warbird and commanded numerous missions for the Tal-Shiar (although she herself was never actually Tal-Shiar).

It was soon after that she was approached by a Federation agent whose intent was to subvert her. Of course, R’Val had no idea initially that he was human because he had undergone surgery to appear Romulan, even to medical scanners. It was always Davis’ intention to seduce the Commander, but what he didn’t expect was to actually fall in love with her. By the time he realized what had happened, he was in too deep to back out. R’Val, for her part fell in love with the “Romulan” that she believed was her Sub-Commander. A dangerous proposition, considering the consequences for fraternization should the Tal-Shiar ever learn of their romantic involvement. Naturally, the time came when Davis had to reveal himself to R’Val. Of course, she was angry, and hurt, and by all rights she should have executed him on the spot, but she couldn’t deny her feelings for him, despite his being Human.

It was about this time that the Tal-Shiar became suspicious of the two. Davis, through his intel contacts inside the Empire, learned of the investigation and warned R’Val. The two managed to escape into the Federation just minutes ahead of the Tal-Shiar Warbird that had been sent to apprehend them. An incident nearly followed when the pair was rescued by a Starfleet vessel, and Commander Davis explained his identity to the ship’s captain and the fact that they were being pursued by the Tal-Shiar. This resulted in the ship’s captain refusing to surrender either to the Romulan vessel (R’Val had requested political asylum). Unwilling to initiate a war, the Tal-Shiar Major in command ordered the ship back into Romulan space.

For R’Val, this was to be a hard choice. She had just sacrificed everything she believed in to be with a human. One she loved, which was a further smear on her mnei’sahe, her honor. By all rights, she should have committed suicide rather than live with such dishonor, but she just couldn’t bring herself to do so.

Commander Davis settled her just outside of Bogata, in what used to be called Colombia in the South American continent. The climate was very similar to what R’Val was used to on Romulus, albeit slightly cooler. Still, it was acceptable enough. In time, she would come to have a child with James and they raised her together. Serala showed a disposition toward her Romulan heritage and James encouraged R’Val to nurture that and to teach her about her people.

When the Hobus Supernova occurred, R’Val was devastated. She had always known that she would never be able to return home and that she would never see her family again, but the supernova made that a permanent reality. No longer could she hold onto the distant hope that one day, she might find her face and forgiveness from her people and be allowed to return. There was nothing to return to.

Eventually, Serala joined Starfleet and R’Val was now alone on Earth, a world not her own, amongst a people that had traditionally been her enemy. Oh, she had had run-ins with the Federations from time to time about that, but it never mattered. Now it did. Why should she remain here? There was nothing for her. James had died years ago and Serala was following in her father’s footsteps and her mother’s teachings. But where could she go? Romulus was gone, and even if it wasn’t she would have been executed the minute she set foot on the planet. It was likely the Vulcans would accept her, but she had found them to be annoying over the years with their preaching about logic and their denial of their true natures. No, Vulcan was out.

As she was pondering these things, one day someone showed up at her doorstep. How he managed to find her, how he managed to even get inside Federation space, much less to their homeworld, she did not know, nor did she ask. But he was Romulan, from the new Romulan Republic, bearing a message that he claimed was from her brother, her only surviving family member, who was now a khre’Riov [Commodore] in the Republic’s Space Fleet. He claimed that Parthen was offering her amnesty for her crimes against the Empire, which he no longer recognized, and was willing to instate her as a Commander of a Warbird if she would simply return and serve. She would have to publicly swear loyalty to the Republic over and above all other loyalties, and publicly renounce her Federation citizenship (granted at the time she married James). R’Val was extremely tempted to jump and run right that moment. However, she still loved Serala and was concerned about what such an action might do to her career. Therefore, she contacted Serala and explained what had happened, excluding the part about Serala’s uncle being alive, and asked her what she thought. After several days, Serala replied that according to her CO, what R’Val did had no bearing on her career. Taking that as license, R’Val hastily packed the few things of value to her that wouldn’t cause questions about her loyalties and headed straight for the capital of the Romulan Republic.