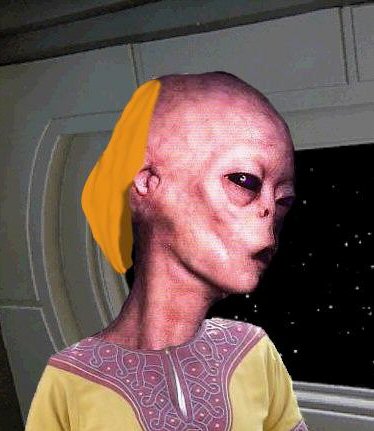 Parker: ::aloud to herself:: Back to work.

::Not that Turc's physical hadn't been 'work' so to speak -- it was just that Brenna had always thought of work as studying or reading, not really performing medical operations, scans, or experiments. Sliding behind the desk, she scrolled down and continued reading the coroner's report on Admiral Pev.::

::When it got down to the nitty-gritty, Brenna had to pull out her padd again and download typical stats for a Xenexian. She hadn't originally realized that the Admiral wasn't human -- perhaps it was an assumption she made too often, seeing that the majority of the officers in Starfleet were human, and those that weren't were fairly obvious, like Turc and the Gorn with the child in the briefing.::

::As she compared the results, her inherited Vulcan eyebrows came down in a 'v' as Brenna frowned. Perhaps the medical officer who had examined the Admiral had also assumed he was human -- although many of stats appeared normal for a human, a few were rather far off for a Xenexian. It was just another reminder how on the outside, we might look alike, but on the inside, we're very different, Brenna reflected.::

::Of course, Admiral Pev was an older Xenexian as well, which might account for at least some of the odd readings. The comparison chart was probably for a Xenexian at the peak of health. It was something she'd have to look further into. She typed off a quick memo to Starfleet Medical requesting more information on the long term degradation of Xenexians, then turned the next item on her agenda.::

::Brenna picked up Turc's file and looked deeper into the results. As she had surmised at first glance, there were no health problems in the Brikar. There was an unusual ridging on the sides of his hands, but it made sense for a security officer of his build, even with such thick skin -- Turc was probably excellent at hand to hand combat.::

::There was precious little on the Nevenians as a people, Brenna learned as she attempted to call up a medical file on them. There wasn't even a full scan for the database. If Mrs. Pev was having headaches and couldn't conjure up a cause, Brenna was going to have an even harder time of it, if the standard treatments didn't work on the Nevenian. There was no mention of any telepathic or empathic abilities, either, so that headache cause was out the window as well.::

::There was a single mention of their technology -- as far as one could tell, they were on par with most Federation planets, with the knowledge of terriformation and, of course, warp drive. In fact, some of their technology might have even been superior to some that the Federation possessed, but the fact that their devices were operated solely by certain chemicals secreted by the Nevenian hand made it impossible for anyone but a member of the species to use. It didn't look like there was any type of adaption for an interface in the works at Starfleet, Brenna noticed, but that was probably again because so little was known of their race.::

::Thoughtfully, Brenna turned her own hand over, studying it. How odd would it be to control a transporter using the sweat from her hand? A bit unnerving for whatever unlucky Ensign was attempting to beam down. But it would be a fascinating experiment, nevertheless.::

::Sighing, she put her hand back down and stared into space, her thoughts carrying her to much more distant lands than this ship had ever explored.::

Nevenians originate from Neven IV and are Federation Members.

Admiral Thenev Pev, Commanding Officer of Starfleet's 7th Fleet, originally made first contact with the Nevenian people. Very little is known about this encounter aside from that Admiral Pev apparently saved them from "a fate worse than death".

Nevenians are hairless with a thick, smooth but leathery skin. They are thin and lanky, with a large head, bulbous eyes, and a small mouth, as well as two large flaps on the backside of their head that have a hint of coloring. They have three fingers and one thumb on each hand. They possess larger than average brain, but underdeveloped lungs and muscles -- the species has evolved past heavy physical labor and are now rather delicate creatures, able to do what their life demands of them, which isn't much due to the level of their technology.

A proud yet gentle and kind race, the Nevenian society is not unlike that of Earth's. There are two genders, male and female, as well as class differences between them. They believe in no particular religion or Gods. Their technology is comparable to that of the Federation, though much of it is controlled solely through a hand device that it operated by certain chemicals secreted by the Nevenian hand that makes it impossible for anyone but a member of the species to use. No Starfleet adapter to this technology is currently in the works.

The Nevenians have shown no inclination toward telepathic or empathic abilities of any kind. Nevenians appear to have some trouble with Federation Standard -- when they speak, they tend to place verbs (especially auxiliaries) after the object and subject (an object-subject-verb format). The only known medicine is something called !Balando~, which is secreted directly from their flesh, not unlike how they run their technology. It is used as an ointment to treat wounds. Due to this unusual ability, Nevenians have learned not to "shake hands" in the normal Terran tradition.

They possess a military, and their society is run by Magistrates of various Houses. Their current leader is Bele-fex Ge-n, the 10th Magistrate of the Sixth Order, senior of all the magistrates.