From 118Wiki
(Redirected from MGia, Thalla)
Jump to navigation Jump to search

Thalla MGia is an Andorian Civilian. She arrived at StarBase 118 Ops but went on in the USS Excalibur-A maiden voyage.

Thalla is a free spirited Andorian. Althoug young she has a colorful career so far, from painting to acting, but her figure grants her main success as a model and actress.

Thalla was born in a family of artist and after most of her family was killed in a shuttle accident at the age of 13, she and her Chan moved to his family house and she adopted the MGia family name. As she grew up she kept her studies directed to the Arts and found a good companion in her cousin Thera.

When she was old enough she moved out and began working on various places, but due to her habit of dyeing her hair she began a modeling career that still shades most of her other achievements. She is a good singer and musician, and has a natural gift for sculpture, whatever the material she tries. She is also a good painter.

One of her latest work as a model: 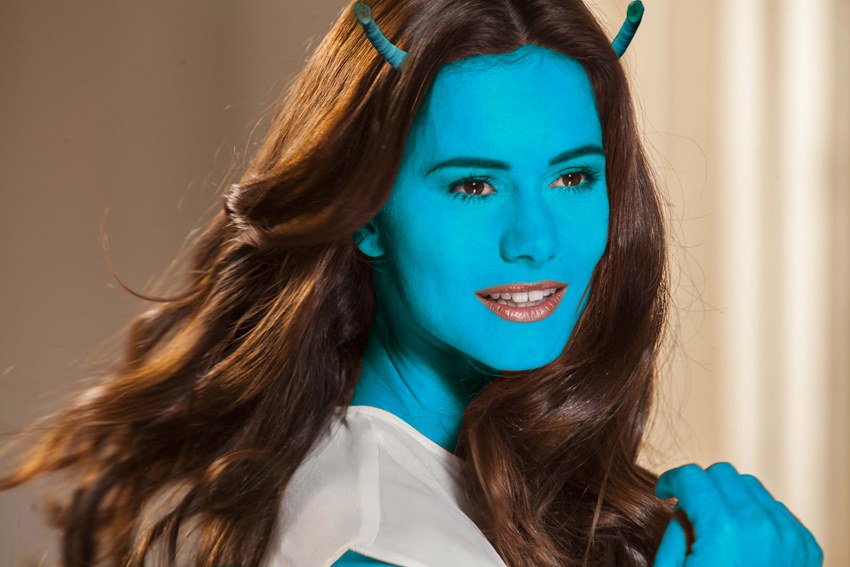 Thalla arrived at Starbase 118 at the request of her cousin Thera. They were very close and when Thera needed her Thalla had no hesitation to drop every thing and come to her aid. Truth be told she was a bit worried, but her encounter with Thera and Doctor MacLaren eased her concerns. As Andorians Thera and Thalla complemented one another regarding gestation, and when Thera found out she was pregnant there was no else she would call.

Thalla's main worry was the fact that she would be dropping in Thera's relationship with Vitor, and feel a bit like an excess then a true family member. Truth be told Vitor and Thera tried their best to make her feel part of the family, but she never developed any warmer feeling towards Vitor.

Onboard the Excalibur she stayed most of the time on Silveira's quarters, and helped carry Thera to sickbay when she feel ill. She followed Thera, when she decide to leave Vitor and Starfleet, knowing she wanted to keep the baby and take her pregnancy full term, in spite all the risks.