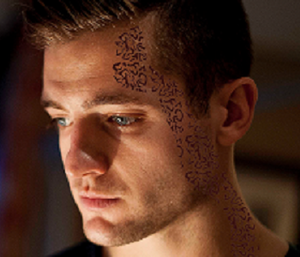 Khyin Ialentus was once a promising Trill Starfleet cybernetics expert, that is before he was joined with the Ialentus symbiont. Perhaps because of his innocent personality, telepathic status or something else entirely, Khyin's joining went terribly wrong which resulted in the personalities of the symbiont and Khyin himself, not meshing quite the way they should. A series of events related to these complications resulted in Khyin engaging in 'Reassociation' with partner of Ialentus' second to last host. He has since been expelled from Trill society.

A Mars born Trill, Khyin was born in the city of Endurance to joined Trill parents who were working as design consultants for the Utopia Planitia Fleet Yards. Both being Joined and both being high profile and accomplished engineers, Khyin's parents naturally had high hopes for him but were loving and compassionate to their child, if a bit clingy in their affections. Khyin spent most of his early life on Mars, barring two years and the odd seasonal retreat on Trill itself. Highly acculturated to Humans and the Federation, Starfleet seemed like a natural choice for Khyin and he was able to join at age 16, graduating 4 years later. He later pursued a medical doctorate at Starfleet Medical Academy, graduating after a further four years. He spent a further year doing research and forming his application for candidacy to be Joined.

Expedited perhaps because of his family's connections or his sheer brilliance and know-how, Khyin wasn't exactly rushed through the Initiate Program, but several red flags were certainly bypassed in his application process. His field work was done with Captain Shieravar Ialentus, known for her unorthodoxy and fiery spirit. Captain Ialentus liked the brilliant, if naïve young man and wrote him a favorable recommendation. After returning him to Trill, her ship, the T'Pol, was caught in a border skirmish in the Klingon Invasion a few weeks later and Captain Ialentus was killed. Seeing no better alternative, Khyin was joined to the Ialentus symbiont when it returned to Trill.

All was not well however, Khyin's status as a telepath (an unusually powerful one at that) perhaps made what should be the gentle and gradual (but bumpy) melding of consciousness's into a new one was not an entirely smooth process. Khyin's nervous system suffered several shocks and attacks and a specialist was called in, Dr. Ketentia Mev, the wife of Ialentus' second to last host. While tending for the young man, feelings between the two Symbiont's personalities began to engender and Ialentus's own personality became dominant for a time. This continued for weeks before the Symbiosis Commission found out and Khyin was brought forth to answer for 'Reassociation'. Khyin (or Ialentus) offered themselves in defense of Dr. Mev. Khyin was promptly expelled from Trill and greater Trill society, despite having barely been joined.

Now the innocent and well meaning personality of Khyin and the tortured, ancient mind of Ialentus occupy the same body. While their personalities have coalesced somewhat normally post joining, there are still some oddities that have prevented Khiy from returning to any semblance of normal. He has since resigned as a Starfleet Officer, though continues to work as a civilian on side projects, most notably his own research into immortality and life-extension. His brilliance has multiplied but so has his seeming eccentricity. Most find him happy, sensitive and kind, having the personality of a more mellow puppy. While some find his odd use and arbitrary exchange of pronouns off-putting, most are keen to overlook it.