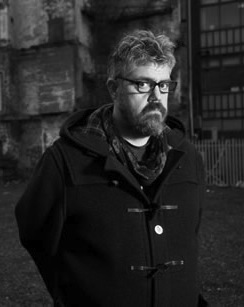 Gav is a Ba'ku poet, musician and journeyman, currently a bartender and proprietor of The Drum, the officers' lounge aboard the USS Drake.

Gav was born on the Ba'ku homeworld in 2031. By 2066, the Ba'ku developed the means of building weapons of mass destruction and was on the brink of self-annihilation. 35-year-old Gav belonged to an enlightened group of some 600 Ba'ku people who escaped the horror of their unknown homeworld and found an isolated planet in the Briar Patch, where they established a new settlement. On the new Ba'ku homeworld in Sector 441, Gav and his fellow settlers adopted a simple way of life and prohibited themselves from using technology. Originally a geologist in his prior life, Gav began a new career as a carpenter and musician.

Eventually, the Ba'ku living in the Briar Patch discovered the metaphasic radiation in the planets rings, which caused their aging processes to virtually stop. Because of this, Gav appears to be in his late 30s/early 40s, despite being 358 years old as of 2389. In the late 23rd century, some of the younger Ba'ku villagers grew tired of their simple lives, and wanted to explore the galaxy. To that end, they attempted to take over the settlement. Following their unsuccessful rebellion, this group of Ba'ku were exiled from the planet, and later became known as the Son'a. Like most on the Ba'ku planet, Gav lost several relatives and close friends when the rebels departed.

Gav was resident on the Ba'ku planet in 2375, when a Son'a plot to strip the planet of its metaphasic particles and forcefully relocate the Ba'ku to another planet. This attempt was stopped by the actions of Jean-Luc Picard and the crew of the USS Enterprise-E. After the reintegration of some of the Son'a into the Ba'ku planet, their stories of exploration and travel throughout the galaxy inspired Gav leave the planet in 2380. He intended to return after 5 years.

In the early- and mid-2380s, Gav worked his way across the Quadrant, residing for a time in the Cardassian Union, the Klingon Empire, and the United Federation of Planets. Between 2384 and 2387, he lived and worked in various locales in the Terran system. By 2389, he was working in an Irish-themed bar on Alpha Centauri, when he signed on to operate The Drum, a crew recreation facility aboard the USS Drake.

Gav is a PNPC of Yogan Yalu.