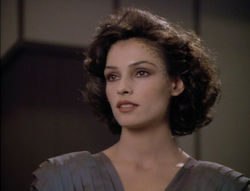 An empathic metamorph is a creature capable of changing its persona and behavior to adapt to the external influence of others through its empathic powers, akin to how a chameleon and other creatures can camouflage their external appearance to their surroundings.

Among sentient species, Kriosians were known to exhibit empathic metamorphs within the population, although this was not known widely outside of the Kriosian sphere of influence even through the mid-24th century.

Kriosian empathic metamorphs can arise either through random mutation or genetic inheritance. The ability is possibly linked to one of the sex chromosomes as it is seen more commonly amongst males, with one historical figure estimating that the female incidence rate is once every seven generations. 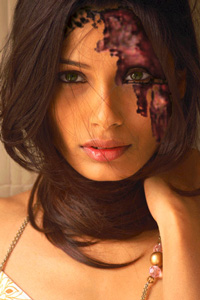 Kamala, a female Kriosian empathic metamorph presented as a gift in 2368 during negotiations to end the centuries-long Valtese-Kriosian war. Much of what is known about empathic metamorphs in the Federation comes from her single voyage aboard a Starfleet vessel taking her to the negotiations.

Roshanara Rahman, a female Kriosian born in 2356 off of the Kriosian homeworld who was given up for adoption and taken by a human couple and raised on Earth.

Rahman did not learn of her status as an empathic metamorph until 2390 from a copy of Aron Kells, who had been fused with memories from an alternate future. She had undertaken a surgery earlier that year to attempt to "correct" her empathic abilities before she truly understood what was happening, but Kells revealed that the operation which had used nanites in the hopes of strengthening her "weakened" neurons had in fact only augmented her neuroplasticity. Thus, Rahman would never complete the finiis'ral and in at least one alternate future, her deteriorating condition ultimately led to her being unable to continue serving in Starfleet and living with the rest of society.