Difference between revisions of "Caleb Zaahn" 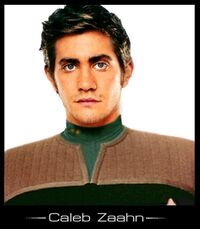 Caleb Zaahn's Mother is a half Vulcan, half Terran scientist who works for the Vulcan Institute of Science on Vulcan. Caleb's father was the Romulan ambassador for Vulcan until his death from a shuttle craft accident when Zaahn was 12 years of age. Zaahns mother, T'rec continued to bring up Caleb on Vulcan.

Caleb Zaahn attended a Federation School on Vulcan, he was refused to attened a Vulcan school because his piers thought that Zaahn would not fit in with the other Vulcan pupils as Zaahn refused to hide his emotions like other Vulcans. fellow vulcans considered Zaahn a rebel because of this. When Zaahn left high school he decided to enroll into Starfleet, as most of his friends from the Federation School were. Although Vulcan is his home, Zaahn could'nt wait to get off the planet, he felt that he never fitted in, although he slightly resembled a Vulcan, he did'nt act like a Vulcan. instead as he grew up with terran children in his area he began to act and feel terran. Caleb Did his upmost to resemble his human friends, changing his apperance from his half vulcan half Romulan to look more like a terran, not wanting anything to do with those two races.

Caleb Zaahn was a Starfleet officer whom served aboard the USS Phoenix-C and USS Independence.

He met Alana Devar briefly at the Vulcan Science Academy, and was later stationed with her aboard the Phoenix-C where he admitted that he had a romantic interest in her. He would also meet Danny Wilde as the two were cadets at Starfleet Academy.

Zaahn was promoted to Lieutenant in 2380 whilst aboard the Independence, where he served as the vessel's science officer, later becoming the department head.