Ensign Ruwon is currently serving as a counselor aboard StarBase 118 Ops. Formerly a member of the Romulan military, he fled to Federation space after growing tired of the corruption in the Star Empire. He travels the Federation with his teenage daughter, Ditala, after having served aboard the USS Za and USS Constitution.

Ruwon is friendly, open, charismatic and energetic; he comes across to most as a charming and gracious sort. His upbringing and training has instilled in him a massive manipulative streak, however, and he is rather mercurial - good at showing people the personality he needs to. His upbringing and service to the Romulan military, as well as over a decade spent in the higher circles of power on Romulus, have made him keenly aware of necessity and the often inconvenient nature of honor and mercy. Despite this, he has a rather fond love of the concepts and values them highly in others. He is, in a twisted sort of way, self sacrificing; he'd rather get his hands dirty than have his loved ones subjected to the darker natures of intelligent life.

He is extremely protective of his daughter, Ditala, and after years as fugitives he still struggles to let her out of his sight for long. He does his best to be a good father, and has tried (largely unsuccessfully) to shield her from the parts of the world he feels ruined him.

Ruwon's daughter (born Arress in 2380), Ditala and Ruwon are very close - largely out of necessity. He spoiled her as a small child and the two share a love of music and the arts. She tends more towards a calm, practical facade. Ruwon's over protectiveness of her threatens to stifle her as she grows into a teenager, but after years on the run and at the edge of survival, it's hard for him to loosen up or for her to feel comfortable on her own.

Born on Abraxas IX in 2355, Ruwon - born Sabochr ir'Iuruth tr'Kharik - is the son of a minor Romulan noble house, one that rose to the edges of power by running one of the hunting lodges on the resort planet. Growing up on the Romulan frontier, he remembers his childhood as rather idyllic, with the colony being prosperous and popular with the nobles from Romulus. His parents were hardworking and honorable sorts, and were proud to discover their son had a gift for music. He was given teachers quite young, and considered a child prodigy with the piano by the age of 11.

When he was 16, he qualified through classes and bloodline to attend the exclusive Imperial Academy of the Arts on Romulus. Thus when he was 16 he was put aboard a transport for the Imperial capital. It was in the capital that he met his patron, Senator Vekar, who first met him when the teenager joined and played in the Imperial Opera. Charming and opportunistic, the Senator eventually convinced the young boy to change his path from music to psychiatry, and in turn taught the teenager much himself. Through the Senator’s patronage he moved from the arts to the Academy of Science, enamored of the opportunity such patronage presented. 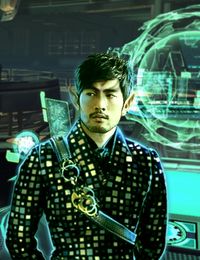 Upon graduation in 2377, he joined the Military under the Senator’s retinue, serving as an Intelligence Collector. As the Senator had predicted, the young man had a way with prisoners, and was soon funneling the Senator information on the Empire's enemies. In 2380 the Senator arranged for his marriage to Mahela, a younger daughter of a senatorial house. The two got on well despite the match being purely political, and Mahela gave birth to his daughter Arress in 2383.

In 2382 he had his first true encounter with a Republican sympathizer, captured for being branded a traitor. Sabochr found the man’s arguments upsetting and convincing, as they underscored his own doubts about the dangerous world of the upper echelons of the Empire. Despite this, he listed the man as a traitor, and he was executed.

After 2382 his doubts mounted, as did the danger he knew he was in. In 2385 Vekar brought up and attempted to assuage his doubts, but the meeting did nothing to help; indeed, the Senator’s indications about how he handled disloyalty only solidified Sabochr’s desire to take his daughter and flee. His wife, Mahela, did not know of his concerns or plans, and he chose to keep it that way for her own safety.

He finally got his chance after a prisoner confessed to a planned attack on Vekar’s retinue on Devoras. He withheld the information in an attempt to allow the attack to happen, and then used the chaos of the bombing to try to fake his and his daughter’s death, taking the 2 year old and fleeing. It worked only briefly, as it became clear the Senator knew him well enough to have him searched for. Sabochr fled to the edges of the Empire, but knew only too well how dangerous it was to try to cross the borders. He took a new name, Ruwon, and renamed his daughter in an attempt to hide. The two of them moved through the increasingly lawless border with the Federation for several years.

In the end they ended up in Federation space by lucky accident - he booked passage on a freighter, only to find the crew and passengers taken hostage by terrorists. The terrorists flew into Federation territory to try to buy time to negotiate with the Romulans, but were intercepted and detained by the USS Diplomatic. Panicking when he realized the ship and passengers were to be handed to the Romulan military, he gave in and surrendered to the Federation, petitioning the captain, Zalea Solzano, for political asylum. It was granted, and he entered Federation space in 2386.

Despite the assistance of Starfleet in setting he and Ditala up on New Cairo, the Hobus Supernova having torn through the Empire had put the seal on his ability to lead a quiet life. Desiring to help somehow but too paranoid to return to the Empire, he joined the academy in 2388, taking his daughter with him to Earth. He entered the Counselling programme, deciding to put the training he'd received to good use.

He graduated from the Academy in 2393 and was assigned to the Za’s maiden voyage, under the Captain who'd granted him asylum two years before. The ship's journey to the edge of space was ideal for him, and the distance has helped both he and Ditala find some peace.

While not counting towards his Starfleet history, Ruwon served in the Romulan military as an Intelligence Collector between 2377 and 2386.