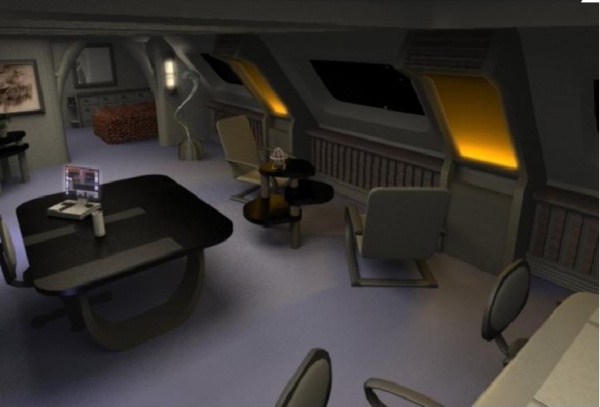 Ian's Quarters is that of the Privacy style offered to Command Bridge Staff.

The quarters is one bedroom. Walking into his quarters, you walk into the study with the master bedroom to the right. The left goes into the living room and dinning room.

Ian made the primary room in his quarters his study; a place to work away from his office. The study has a large black desk with grey curving legs on it. Most of the time it is covered in PADD's. There is a conference table to the right that seats 6 officers. Ian will sometimes use his study to host small informal meetings or a breakfast style briefing.

There are two chairs that set in front of the center window of the room that Ian likes to use to unwind; reading a book and having a glass of wine at night looking out onto the stars or what ever is in view.

Behind the desk, Ian had a large MSD LCARS of the sphip installed between two large book shelves. The shelves have around 50 to 60 old earth books on them and some framed family photos as well as a few artifacts from around the quadrant. On the wall next to his bedroom, there is a painting that was done by his great grandmother.

This room has a large dresser along the back wall with a mirror above it. The dresser has a few framed photos on it. ian keeps fresh flowers on the dresser as well. There is also his grandmother's old rocking chair sitting in the corner of the room.

The bed bumps up to a shelf type headboard under the window. The headboard has a photo of his mother and father on in and a few books that his great grandmother wrote as well as one that his brother wrote.

The living room is a little smaller than the study but very cozy. There is two black leather sofas that float center of the room with an extra long wooden table at the far end running along the wall under the windows. The table top has a holder for Ian's Fencing Foil and Mask setting center. There is a photo of the Academy Fencing Team next to it and a few medals that his team won on a rack.

There is a round glass top coffee table between the two sofas with photo album on it and a few Trill and Vulcan meditation candelas on it.

Behind the far sofa there is a glass dinning room table with four chairs. The Table has his grandmothers handmade vase in the center with Trill Tulla Bush Flowers in it.

The wall along the inside has a long waist high cabinet along it. The cabinet has some cooking tools and hot burners on top of it. Ian built a copper pan rack and hung it on the wall over the cabinet to hang up all his grandfathers old pans on.

At the far end of the room there is a shelve that host all kinds of framed photos and a few childhood toys and a silver plate that he got when he left The Deep Space Research Station. Next to the Shelve is Ian's trombone on a stand and some sheet music framed above it. The Selves top has a huge Model of the Enterprise NX-01.

There is a small keyboard leaning up on the corner of the inside wall. There is a few Jazz photos from New Orleans hanging above it.