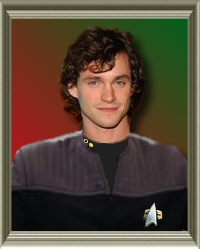 Anthony Losett Creed, a Terran, is currently the chief intelligence officer attatched to the Federation Embassy on Duronis II.

237011.18: Enroute to The Vulcan homeworld for her education in psychology, her convoy encounters the Borg.

237011.19: News of T'Zara's encounter with the Borg reaches the family. As a result she is classed as missing presummed...but the family refuses to believe that maybe the case.

237111.19: Nathan Creed sercumbs to the truth and realises that his daughter may indeed be dead and has a funeral for her, but Kathryn refuses to believe it and refuses to attend the funeral.

237202.02: Anthony's depression takes a turn for the worse as he becomes disillusioned with the world and opts to reside in the ficticious worlds that reside in the family's holodeck. (where he picks up several of the skills he is now utilising as an Intel Officer.

237203. 04: Kathryn Creed comes into contact with a group who call themselves "the Trail Chasers" a group formed by people who have lost friends and families to the Borg and try to find them in hope of "Liberating" them. Fearing she may have lost her son, she refuses to lose her daughter as well and chooses to join them, much to the disapproval of Nathan Creed.

237709. 15: Nathan Creed is promoted to Captain and given control of the USS Enigmatus.

237804. 12: Realising that she maybe chasing a lost cause, Kathryn Creed decides to leave "The Trail Chasers" and return home, shifting through billions of Borgs all over the different Quadrents in hope of finding one imparticular was not the life she wanted to lead.

237704. 15: On her way home, Kathryn Creed's shuttle is caught in an inexplicable phenomenon and crashes into an uncharted planet...

237704. 18: The search party sent to find her conclude that no one could have survived long on the highly radioactive planet...

237810. 22: After much work from his father's part, Creed slowly but surely pulls out from his reclused phase with the intention of reintergrating back into reality. Now much old still with traces of his depression, Creed was mildly keen to be back in the real world. Nathan vows to help him back to full health through any means necessary.

237912. 04: After going through several different Councillors Creed is placed in the care of a Betazoid Councillor by the name of Beatrix Delaney. Though the pair did not work well together they somehow managed to get improve on a few things.

238012. 25: Without warning the USS Enigmatus is set upon by several Romulan ships and is destroyed along with its crew, including Nathan Creed.

238102: 15: After being accused by several relatives of not caring about his father's death, in an attempt to shut them up, Creed decides to do the one thing his father always wanted from him...join Starfleet...but only after 1 year of joining, it soons becomes apparent that Creed is more than adequate for the role he applied, because of the different Programs he assimilated during his Reclused period Creed was able to pass almost any exam that Starfleet could device with little or no studying. Though he strongly disagreed with the idea, Creed was fast tracked into graduation.