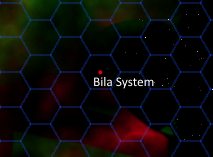 The Bila III planet is not on many trade routes, as the Biliarans are largely self sufficient, or were until 2392. The planet is fairly unique, as it lacks an Ozone layer but instead has an interesting noble gas in it's upper atmosphere that traps a lot of incoming UV light and makes the sky violet rather than blue. It's theorized this is a reason why a majority of the Biliarans have blue and violet tinted skins.

Also, unlike many M class planets, the larger quantity of noble gasses means it has less oxygen than normal, and many visiting sentiments often take injections to more effectively absorb Oxygen.

However, the planet is ultimately doomed within the next hundred thousand years from multiple angles - the sun is warming, and will soon begin to accelerate the rate of evaporation, and even if that wasn't the case, the inner and outer moons will collide sometime in the next half million years, which will send a mass of debris into the planet.. and potentially accelerate the outer moon moving inward.

In 2369, the first planetary evaluation studies were undertaken as part of an evaluation of resources being committed to explore the Avalon Sector. However, the Dominion War changed all of that.

In 2392, they became the focus of attention in the Avalon sector after a rash of unexplained disasters began to devastate their planet. Investigating it, the USS Doyle-A were able to stop the disasters, revealed to be a massive plot by the Sisterhood of Chains. The death toll was approximately 10% of the population, but estimates show that without the intervention of Starfleet, the death toll could have easily been at least 25% of the population. In addition, while the damages were estimated at ~3.5 Petacredits, again, estimates show it would have been astronomically high - the GDP of several planets combined.