Zuriba's living quarters are on Deck 7 located in between the Main Holodecks and the Forward Lounge bar, ideal for late night parties. Zuriba selected the quarters himself once taking over as Chief Operations officer with a view to facilitiating his social life.

Zuriba is know for his self-lessness perhaps most of all. He has an infectious smile and loud good humour. He is usually cracking jokes or playing practical jokes on people. Despite this, when on duty Zurib (like most Bolians) is hardworking, efficient and meticulous. He is gregarious and particularly enjoys cooperative work of all kinds although he is known to his crewmates as being a bit of a worrywart when the work isn't going well. Occasionally he can get visibly nervous and stuttery but most time he is confident and in your face. When chips are down, however, you can always count on a Zurib whose selflessness is legendary. His educational grounding in engineering and functions combined with his organization, meticulous style and trait of working well in professions that privilege group cooperation and group effort all mean that Zurib was naturally suited to being a chief operations officer co-ordinating a starships departments. Zurib is, however, the same in his demanour off duty and sometimes considered by some to be a bit of a busybody, nosey and a gossip.

Socially, Zurib talks quite freely with anyone. He always takes an interest in people and likes to know what is going on in their lives. He is, however, a bit of a gossip although this is because he cannot help himself sometimes and, therefore, no maliciousness is meant from it. At the Academy the slightly tubby, eccentric Bolian was known for being the life and soul of the party -his quarters oftening being the party venue and his antics often landing him in trouble.

Bolians are, to say the least, gregarious. Families can easily produce up to ten children, and so a typical Bolian childhood is possessed of many children and very little quiet. Zuriba has a natural tedency to chase women has landed him into trouble on a number of away mission and lent him the reputation of a bit of a ladies' man. 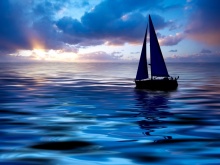 In his spare time Zuriba enjoys playing team sports on the holodeck (he is always eager to learn a new team game from a different planet or era). Zuriba is an avid sports. His homeworld, Bolarus IX, is largely a water world, and the disparate nature of the most early population centers caused much of the independent cultural development that remains apparent among the various Bolian races to this day. There are no large anchoring continental masses, and as a result the legendary surface storms of Bolarus IX are able to move across the planet's surface unchecked by geographic barriers. As such, Zuriba is an avid sailor and loves sailing in his spare time (either on the holodeck or when on leave). His move into piloting and studying as a helmsman was a natural extention of his sailing catermarans on Bolarus IX. Zuriba also enjoys Bolian Vectorboard, similar in appearance to a surfboard, is an aerodynamic form constructed out of polyduranide and slightly larger than its aquatic forebears. The vehicle is propelled through the air at speeds reaching up to 200 MPH. The rider stays on board using either magnetic boots or polyduranide foot straps, and operates the board through a combination of balance and reaction control thrusters directed via a foot pedal under the lead foot. Vectorboarding is a popular pastime on many Federation planets, though strict ordinances regulate when and where a vectorboard can be ridden. They come in a variety of sizes and colors.

At the academy Zuribia was a member of the martial arts club and learned a number of combats from around the galaxy. His main combat sport, however, is Modern adel'iin which he practices in tournaments (with the loser going slack to simulate death and signify his surrender to the judges). It should be noted that the custom of completely shaving the head (which Zuriba follows) is a direct result of the rise of adel'iin as a means of resolving disputes. While the practice of challenging another Bolian to a duel beneath the waves is rarely used, it has never formally been outlawed. Having a head of hair is a decided disadvantage when using adel'iin, not only because of the added drag but because it provides an ideal handhold (early adel'iin resembled 'catfights' from pre-warp Earth, with much hair-grabbing). The shaved head has persisted into modern times as a silent message to others: 'I know adel'iin, and can best you.' Zurinda is also a master of tzian'adel'iin (literally 'taking the dispute to the sea' i.e. process of the duel beneath the waves) which is not nearly as formal as the Andorian ushaan, or any similar Terran custom. Rather, it more resembles the simplicity of a Klingon duel: A Bolian challenges another, they immediately head to the nearest deep water with a neutral judge, and fight until one is subdued. In the past, such duels would be to the death, but in modern times it more resembles a tournament bout; the loser slackens and yields their position in the dispute. Where the tzian'adel'iin differs from the Klingon way of resolving conflicts is the frequency (or lack thereof) of its use. It is very rare that two Bolians arrive at an impasse they cannot talk or negotiate through, and invoking the tzian'adel'iin is a last resort - because in actuality, more than half of the Bolians who shave their scalps do not actually know the forms and techniques of adel'iin (this is not the case with Zuriba) 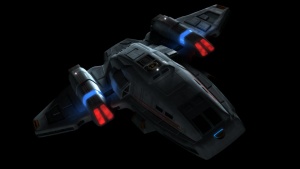 Zuriba is a trumpet player and he can often be heard playing "Bolian Blues" from within his quarters. He also enjoys cooking, especially traditional Bolian recipes although because a traditional feature of Bolian cuisine is the use of meat that has been allowed to partially decay, Zuriba's crewmates rarely accept a dinner invite. Contrary to popular belief, the meat is always cooked. Seafood, both raw and prepared, comprises a significant majority of the average Bolian's diet, and on his own world it is said a Bolian can determine the type of fish and location of origin from taste alone. Zuriba's speciality dish is the cooking of an iridescent mussel-like shellfish is a particular delicacy, called a name that translates into Federation Standard as 'shimmershells'

Zuriba also excelled as a pilot at the Academy and eventually became a central member of the renowned Nova Squadron flight team before going on to serve as a helmsman in Starfleet. Zuriba also loves reading Federation literature from around the galaxy and has quite a range of old books from lots of different cultures. He tried to bring a book back from each new planet he visits. This is, ultimately, connected to his long standing interest in other species as he loves to find out as much as he can about other cultures and try out their practices (see sports above)

Bolian marriages often involve more than two members. Any additional spouse is referred to as a "co-husband" or "co-wife", respectively. Since many of Bolarus' traditions arose out of the nautical tradition of its inhabitants, and the best source of crew for your vessel is of course your family, polygamy was never frowned upon. If the two partners in a marriage both consent and love a third deeply, the third Bolian can be added into the marriage (which is generally a secular ceremony performed by the eldest member of each family). There is no theoretical limit on the upper size of a Bolian marriage, though in practicality and due to the time it takes for a Bolian to become comfortable enough with another person to consider marriage (there is no divorce on Bolarus), it is rare for marriages with more than four or five spouses to arise.

Zil does not live with Zuriba. He was born was born nine months after Zuriba's Academy class's graduation party on the pleasure planet Riza.

Zurib's father was an Engineer (with a speciality in subaquatic mining); his co-father a shuttle pilot; his mother a lecturer in social policy at the Bolian Interstellar Research Institute (located in Bolsetuat, the old Bolian capital on the largest continent, Rasara); and, his co-mother ran the family farm. Zurib was educated by members of his family at home and learnt many skills from them.