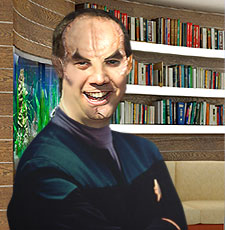 Ensign Zonhar is currently serving as Counselor on board the USS Avandar.

protrusion on his chin with his right hand, his head cocked to the side thinking deeply. He is prone to pacing and often incorporates this nervous energy into his rounds by walking with his patients in their daily lives and often jumping from situation to situation, and coming back after further deliberation. He is known for these “Walk-And-Talk” sessions mostly although he does use an office when it is necessary.

Though both of Zonhar’s parents were very loving, intelligent, and rich parents that instilled in him a great aptitude for learning, emotion and self exploration, he nonetheless had a major falling out with his parents over his decision to take Li’ainea as his first wife, instead of a true Denobulan of high stature. Furthermore their concerns were all the greater as they know that it takes a very special individual to indeed be able to handle the extreme shock to the system that the outpouring of deltan pheromones and emotions which would transfer during lovemaking. As for Zonhar and Li’ainea however, they spent much time secluded in private study and exploration both mentally and emotionally before taking their vows, and though Zonhar did indeed find the experience every bit as overwhelming as it was pleasureable, Li’ainea’s gentleness and beauty and empathic abilities were nonetheless able to quell him from going over to the brink of insanity.