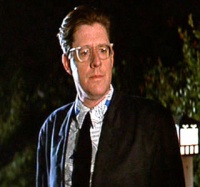 LtCmd Edward West is an NPC character currently stranded on the USS Ronin. He is a Starfleet Intelligence Investigator assigned to uncover information about the mysterious disappearance of Lieutenant Synak.

Edward frequently dispells any rumours about his joining of SFI by the declaration that he is not a spy, rather a special investigator. He has never had any wish to be a spy, and feels he wouldn't be any good at it. He relishes in information, and considers himself to be an avid Student of Information. He enjoys decrypting data files and likes puzzles. A quiet man, he is deemed very 'prim and proper' by those who initially meet him. Some would say genteel. He is a studious man who rarely raises his voice, but also has a sense of humour which he classes as very personal - he will often find trivial things amusing where other's won't.

Mission to the USS Ronin

After SFI never recieved Lieutenant Synak's last updates it was clear that she had not returned from the Rakis Mission. SFI is treating her disappearance as suspicious due to a number of clues in her previous logs. They dispatched LtCmd West to investigate her logs and to determine whether or not foul play is involved. After posing as a technician whilst the Ronin was under repairs at Utopia Planitia, Edward managed to break into Synaks logs but was stopped when it was clear someone was trying to steal the Ronin from spacedock. He is now working with Captain Robin Phoenix, Lieutenant Bertels, Ensign Trell and Cadet Klaar to stop the starship from being hijacked.