From 118Wiki
(Redirected from Webber, Jess)
Jump to navigation Jump to search

Jess Webber is a human/Gideon instructor at Starfleet Academy. She was previously assigned to the USS Mercury after its relaunching in 2391 and later served aboard the USS Garuda and the USS Invicta as an operations officer. 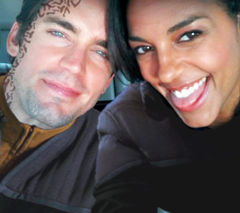 After growing up on Dracos V, she went on to study viola performance at the Aldebaran Music Academy. She later performed for the next couple of decades with various productions and orchestras until she returned home to help her ailing father with his trading business in the final years of his life. After he passed away in 2359, she went back to her first love of music but found the life of a traveling musician quite lonely. She came back to help her mother and found various odd jobs on and around the colony.

Eventually, Jess decided to return to university studies and entered Starfleet Academy in 2385, majoring in operations with a minor in security. While at the Academy, she continued to play the viola in the campus orchestra as well as participate in the Academy's track and field team. She graduated in 2389 and was assigned to the USS Drake. By 2391, she had been assigned to the recently relaunched USS Mercury.

Following a total life support systems failure, the crew of the Mercury were forced to abandon ship. They survived in their lifeboats for a couple of weeks before being picked up by a Cardassian ship and returned to DSX. The Mercury herself was then found by the USS Garuda after having gone rogue and attacking both Starfleet and Cardassian ships. The Garuda managed to recover the Mercury, but the science ship was heavily damaged and was to be sent back to Federation space for extensive repairs.

Some of the Mercury crew, including Jess, were subsequently assigned to the Garuda. In mid 2392, Jess was among the officers chosen for the Invicta Expedition, a new deep space assignment aboard the USS Invicta.

By 2399, Jess had taken a position at Starfleet Academy as an instructor. 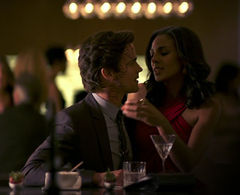 Jess enjoys teasing her friend Nick at a charity bazaar in Room 7 lounge on Deep Space 10.

Confident in herself, but pretty laid back, Jess is a capable officer who's not necessarily thrilled to be working on the Mercury. Still, she gets along well with Lieutenant JG Nick Falls, the ship's tactical officer whom she met when they were both assigned to the deep space science vessel.

WEBBER: Shore leave is the worst. What is an operations officer supposed to be doing when a ship is not in operation, huh? Three lifetimes of experiences, surely you can tell me.

::He got woken up out of a perfectly good sleep for this. There wasn't even any interesting gossip she had for him, no emergency. Sometimes he wondered about her sanity.::

Her personal life has always been somewhat of a mess, with a string of bad relationships. Just since she joined Starfleet, there was Johann "Johnny" Schultz, who cheated on her with her roommate at the Academy. Then there was Lieutenant Huynh who had been serving on the Galaxy class starship USS Endeavour and who she later discovered was already married. Finally, there was Anton. The less said the better.

Yet though she says she's taken a "leave of absence" from such things, secretly she still holds an idealistic view of love and marriage, based in much part on her parents' story: a human trader who traveled the stars until he came across a Gideon woman on Dracos V and finally decided to settle down. Nick's own divorce though in 2391 comes as sobering news.

HORNSBY: I’m only asking some simple questions, here Lieutenant. It seems you’ve had a few drinks and there is nothing wrong with that. I don’t seem to recognize you and there are two Galaxy-class ships docked at the station right now.

FALLS: We just want to-

::::Before he could finish, Jess was already pushing him aside to confront this badgering ensign.::

WEBBER: Whaddya mean this isn't my ship? You think we don't know what our own damn ship looks like, Ensign?! I'm drunk, not blind!

Jess is a PNPC created by the writer for Rahman/Bakari. Jess is basically everyone's 89-year-old grandma who doesn't have any more concerns about what's proper or not and is just having fun in life... She also enjoys baking cookies.