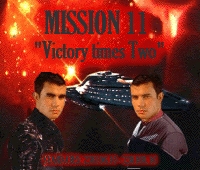 The Victory was called to a nebula in the Cantina system. Conditions in the nebula were harsh, very destructive. So Ensign Beta proposed to modify the shuttle Hardy so that it could survive and navigate the nebula. His plan was approved, and the shuttle modified.

Captain Hurne informed Commander Parker that a distress call had been picked up in the system, seeming to come from the Victory. Starfleet had done a check, and no vessels were missing. The Victory was summoned to investigate.

When the Victory arrived, Nugra launched a number of probes into the nebula, they transmitted back that a vessel was in the nebula, seeming to be a light cruiser. Shortly after, a message was received from the vessel, from Captain Hurne, requesting aid. More probes are launched, and two smaller vessels are detected near the light cruiser. After the Captain briefed the rest of the crew on the situation, he assigned Cmdr. Parker, Lt. Nugra, Ensign Beta, Ensign Pacino, Ensign Margate, Ensign Conway, and Ensign Thomas to the shuttle, while Lt. Cmdr. Phoenix and Lt. JG Solan remained behind with the Captain.

The Hardy launched and they made there way in, and got quite close to the light cruiser, the smaller vessels seemed inactive. They attempted to hail the cruiser, but couldn't get a response. Commander Parker used her access codes, assuming the light cruiser was the Victory, to open the shuttle bay doors and activate the tractor beam. They were drawn inside, however, as soon as they landed 2 Vulcans and 7 humans and 1 Android were detected moving toward the shuttle armed.

Meanwhile, the Victory herself began to detect signs that one of the smaller vessels might be moving towards them. Lt. Cmdr Phoenix makes a few modifications to the communication with the probes, and confirms a ship is moving towards them. As most of the senior staff is gone, Solan took over the Tactical position temporarily. Captain Hurne, concerned that the vessel might be hostile, orders phasers readied and locked on the vessels engines. Before they can fire, however, the vessel hails them claiming to have Commodore Hurne (The third Hurne to be encountered.) aboard. It is allowed to dock.

Team Parker at first prepares for combat, then stands down, assuming the persons running towards them are merely curious about them, and not hostile. The shuttle door opens, to reveal Simon Keyes, the husband of Commander Parker. No one is quite sure what is happening, until an Andorian wearing a Marine Majors uniform appears, it is Mal Avatar. Most of the crew is taken to the brig by Chief of Security Keyes; however Margate, who remained behind on the shuttle, is left free. The Away Team is taunted by the other crew. It seems that most of the USS Victory crew has doubles on the other vessel they later learn is the ISS Victory. A few of the crew is taken away to be questioned, and Beta's double takes him away to experiment on him. Margate manages to break them out of the jail cell, and the team disappears into the Jefferies tubes.

Commodore Hurne is escorted aboard the USS Victory to the Captain where he claims he needs the Victory's help. It seems that his vessel came through a rift in the space time continuum accidentally, he wanted to return immediately, but most of his senior officers wanted to remain. Now there is a mutiny in progress and Commodore Hurne needs the USS Victory's help to regain control. He also has someone on board his vessel posing in for him, but he isn't sure how long that will last. They need to hurry.

Solan's duplicate is working for the Cardassians and gathering intelligence. He seeks to be promoted, hoping to do so by implicating Keyes in an attack on Major Avatar. He is about to commit the act, when Avatar convinces him to join the Major in the cargo bay to witness the capture of the USS Victory Away team. He agrees, feeling he can implicate Keyes in not only attacking Avatar, but also in collaborating with the USS Victory crew.

The Away Team continues in the Jefferies tubes, eventually exiting into the cargo bay where Major Avatar has marines waiting for him. Avatar taunts the crew, climaxing by giving Parker a phaser and telling her to kill the person they think is Keyes. The second Solan realizes now is the perfect time, he springs at Avatar, stabbing him in the shoulder. On the bridge, the real Keyes discovers the imposter posing for Commodore Hurne and kills him, making an announcement to the entire vessel which further adds to the confusion in the cargo bay. The Away Team uses that opportunity to escape, as does Solan's duplicate. In the absence of Commodore Hurne, Phoenix's duplicate is promoted to Commodore and given command of the vessel. He prepares to attack and capture the USS Victory, however there are other people plotting against him.

Avatar discovers the duplicate Solan is a Changeling, and attempts to enlist his help in capturing the ship, and therefore the help of the security force. Solan agrees, but wants to be allowed to capture the USS Victory crew. Avatar agrees, and the second Changeling sets off. Captain Hurne, onboard the USS Victory, Lt. Commander Phoenix, and Lt. JG Solan decide to help Commodore Hurne, and in the process recover their away team. It is decided that Lt. JG Solan will take the form of Commodore Hurne to work with him. He does, but almost immediately suffers flashbacks to when he was a prisoner. He manages to hide and control them. Commodore Hurne and Solan launch in a shuttle, and begin to discuss the habits the Commodore has. As they near the ISS Victory an explosion rocks it, a bussard collector has exploded. They use the confusion to land.

On the ISS Victory Nugra has split off from the main group, and finds his brother Morg who survived in this universe. They agree to work together at least temporarily to help the USS Victory. After a bit of work apart, they both meet just outside of the Jefferies tube exit where Parkers team is going to meet them. Beta escapes from his duplicate, but they agree to work together for a bit, Beta going back to the shuttle to try to get it running while his duplicate returns to the bridge to find out what is happening. Conway joins the USS Victory Beta by transporter, and they both set to work repairing the shuttle. Solan and Commodore Hurne arrive and meet with Conway. She tells them the shuttle will be ready in no more than 20-30 minutes.

Avatar sets his plan to capture the ISS Victory in motion, quickly taking command of the bridge, engineering and other key areas. As Commodore Phoenix tries to activate the self destruct, he is killed. Solan and Hurne meet with Margate's duplicate, one of the few remaining officers openly loyal to Commodore Hurne. The second Margate, his squad, and Solan are sent to find Commander Parker. Parker's team is creating multiple distractions, and even generates an explosion. Commander Parker receives a comm. message from Solan, saying he is on the ISS Victory. After he proves he is really who he says he is, she agrees to meet with him in the shuttle bay, hopefully they can leave when they get there. Shortly after, they come upon Solan's duplicate who claims to be the Solan from the USS Victory. Parker grabs her phaser and fires, realizing only afterwards that it was set to kill. They finally exit the Jefferies tube and meet with Nugra and Morg.

Avatar sends a message throughout the ship that he is now in command and will overthrow Emperor Wolf. He also says he is willing the send the USS Victory crew back to their vessel if they will only help him finalize his control over the vessel. Tthe second Beta and Commodore Hurne prepare to release knock-out gas throughout the ship so they can take control. Pacino's duplicate alerts self-proclaimed General Avatar that Commodore Hurne is back aboard, he goes ballistic, ordering the Commodore caught.

On the USS Victory, two new Ensigns arrive, Ensign Simon Rocket and Ensign Joshua Phoenix. They begin work on making it safe to transport within the nebula, with the help of Lt.Commander Phoenix.

Parker's team makes it down to the shuttle bay, and Parker orders Solan to return to there, telling him she intends to destroy the ISS, suspecting it is hostile. Several concerns are expressed from both her team, and Solan. Solan requests to be allowed to remain on board for a short time so he can complete his promise to help Commodore Hurne regain command. When Margate hears of his request, he asks to help him. Margate, Margate's duplicate, and Solan meet to come up with a plan. Parker's team is attacked in the shuttle bay, and must launch the shuttle immediately, she instructs Margate and Solan to be in an escape pod, they report they can launch in five minutes. The Margate from the ISS Victory goes to the bridge to help regain command, while Solan and Margate reconfigure a console to transmit a signal. They hail the bridge and Solan, still in the form of Commodore Hurne, informs the bridge crew that he has regained control of the vessel; loyalty quickly shifts back towards the Commodore. Margate's duplicate quickly secures the bridge, and the rest of the vessel falls under the command of Commodore Hurne.

Avatar, having left the bridge to commence a futile search for Commodore Hurne, returns, only to be captured, he is killed shortly after. Margate and Solan launch the escape pod, and are beamed back to the Victory by the modified transporter. The shuttle moves back to the Victory without incident, when it arrives everyone that was onboard the ISS Victory, including Solan and Margate, are placed in the brig until their identities can be confirmed. The ISS Victory moves back through the rift, Commodore Hurne yet once again in command, and the USS Victory continues on its way.

On their way back an explosive charge shatters decks 9 and 10, incluiding the shuttlebay. An investigation follows as are repairs. After careful investigation and discussion, it is concluded someone from the ISS Victory had to be responsible. He or she had traffeled onboard Commodore Hurne's shuttle, placed a charge and activated it. Then the invader escaped on a shuttlepod unseen by disabling sensors.