From 118Wiki
(Redirected from Velal, Rhean)
Jump to navigation Jump to search

Rhean Velal is currently tending bar in the Evolution Lounge on the USS Darwin-A. 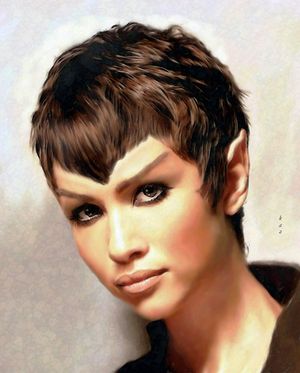 Rhean is cunning, manipulative, and tough (like all good Romulan characters from Star Trek) however, she uses her wit and dark talents to help her customers and to benefit Starfleet.

A female Romulan who was once a low level spy for the Tal Shiar. However, she was recruited against her will and her disdain for the Romulan's secret police only grew more strong over her time working for them. In the chaos of the Hobus Supernova and destruction of Romulus, Rhean let the Tal Shiar believe her to be dead and was taken in by the Federation. After months of debriefing, SFI was satisfied they Rhean had given up any information that might be useful.

Shortly after, Rhean began trying to figure out how to make her self useful again and start a new life within the Federation. She had no interest in becoming a member of Starfleet, or any other military organization. She tried nursing, teaching, coaching, but eventually stumbled into hospitality. Rhean quickly discovered that she had a talent for serving drinks, making deals, bartering, and on top of everything she has unique knack for putting officer's problems in perspective through sharing her own pains, struggles, and tribulations.