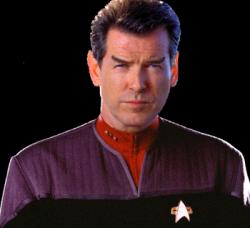 The only child born to a Vulcan scientist (father) and a Vulcan diplomat (mother), Varaan had high expectations placed upon him since birth. Born in 2330, Varaan grew up as any normal Vulcan child would. He attended Vulcan monastic school and learned to control his emotions from the clerics there. When he was old enough to enter the Vulcan Science Academy, his father defended Varaan's application despite Varaan's low (relatively speaking) grades and apparent lack of interest in the sciences. Varaan had always been more of a "hands on" person. He was more interested in taking things apart and putting them back together. He suffered through his first two years at the VSA until his father realized that to continue would be illogical. Varaan took the next year off in an attempt to attain "Kolinahr." Like so many others before him, however, he failed to complete the process, mostly because during that year his Pon Farr occurred. The marriage arranged between his family and another prominent Vulcan family also took place, and Varaan was wed to T'lani. Though they had never before met, their joining was not altogether unpleasant for either of them. They fell in love with each other, or at least as close to love as Vulcans come. T'lani's father was involved with the V'shar, the Vulcan Intelligence Agency. Noting Varaan's technical abilities, he sponsored Varaan's application to the V'shar's training program. After two years of training in support services, Varaan spent the next eight years behind the scenes. On one particular mission, Varaan's involvement became more than just supplying the operative with the necessary equipment at the rendezvous point. Romulan Tal Shiar agents on Vulcan nearly ruined the entire operation, until Varaan's quick thinking salvaged the mission. Varaan's superiors decided to make him an operative instead, and Varaan completed another two years of training, this time in counterintelligence and covert operations. Varaan spent the next twelve years as a very successful operative, but was constantly wanting to tinker with something. He then spent a couple of years at CIASM and earned a doctorate in starship design. Finally, Varaan decided that his future lay along a different path, and journeyed to Earth to attend Starfleet Academy. His application had been accepted, and SFA was looking forward to having Varaan's skills at their disposal. Varaan was already an adept engineer, with a few published papers in various fields of theoretical engineering.