Hello! My name is Gina and I write for Lieutenant Commander Lael Rosek-Skyfire, Mission Specialist aboard the USS Chin'toka and Major Zaaia Leix, Marine Commander/Orbital Mechanic aboard Denali Station.

I was 17 when I first joined the group. I spent what felt like forever trying to find a group that I liked. When I did--wow! However, in my second year of college, I had to retire my character (Rebecca Hollendale) to focus on my studies. But I missed the outlet that role-playing provided and before long I was reapplying to UFOP with another character (Elina Kincade). Again, real-life interfered when my oldest son was born and I had to retire her. As my son grew older, I had more time to write and roleplay. So I rejoined with my character, Lael Rosek, in 2015. With the exception of one leave of absence to have my second son, I've been an active member ever since. 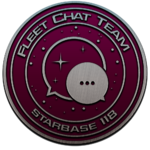