From 118Wiki
< User:Salak
Jump to navigation Jump to search 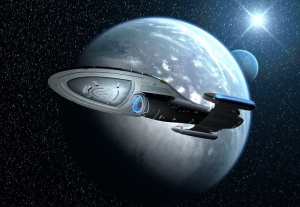 The Eagle takes its name from a noble bird of prey, an emblem of the old United States of America . This bird represented the strength and majesty of a people who admired strength and courage. From the early days of Earth many peoples have looked to the Eagle with a spiritual admiration. The Eagle is not the largest or indeed most powerful of the ships in the fleet, but is extremely resilient and flexible in it's role.

The USS Eagle NCC-74659 has only had one Captain since her launch in 2375. When she was launched the Eagle was plagued by a reacquiring computer system problem which almost saw her being withdrawn from service completely, but the arrival of the Dominion war meant that much of the ship building was geared to war vessels and anything else that could be used was drafted to aid the war effort. The Eagle was pretty much stripped of any unnecessary parts and used to ferry supplies from Starbase 118 to Earth or where ever else supplies were needed... The Eagle performed well for the most part but reacquiring computer problems often saw her stuck in dry dock, slowly she was forgotten and almost mothballed..

The Intrepid Class starships marked a change in course for Starfleet away from building very large, elaborate starships and toward building smaller, more efficient vessels. One of a series of newer and more compact ships, the Intrepid Class was designed to be a fast multi-mission starship primarily intended for exploration, survey, and courier missions. A fast vessel with advanced sensing and research capability, the Intrepid class makes for an effective exploratory platform, while at the same time carrying sufficient armament to act as s small agile combat vessel. Several important advances in Starfleet technology mark the development of the Intrepid class. One of the most important features of the starship is the variable geometry warp nacelles, which allow an adjustment of the warp field to maximise its efficiency, as well as to minimise any negative effects on the fabric of space. Utilising this cutting edge technology results in a vessel that can be flown at extremely high speeds with a significantly smaller power source than other ships of comparable size. Another design breakthrough in the Intrepid Class is the inclusion within a protected backup chamber of a series of components that would allow for the assembly of a spare warp core. Should the main core be lost for some unforeseen reason, a replacement could be constructed by the engineering crew without having to replicate all the components.

The Intrepid Class pioneered the systems that would allow a starship to make routine planet fall. Previously unheard of in starships, the ability to land and take off again with minimum system impact is being incorporated into a series of vessels, thanks in large part to the advance made and lessons learnt in the flight of the Intrepid class. The most advanced computer systems available are at the heart of the Intrepid Class ship. The computer uses bio neural gel-packs that incorporate synthetic neuron analogs in a nutrient gel medium. This arrangement mimics organic neurons, allowing the packs a processing protocol akin to what happens in a humanoid brain, speeding data functions and improving overall computer operations.

The Eagle has spent several months undergoing an almost total refit to bring the Eagle up to and beyond it's Intrepid Class, the extra space from redundant cargo holds was replaced by sophisticated sensor equipment and shield generators as well as torpedo storage and a larger aft shuttle bay..

Due to the extra space, crew quarters are slightly larger and more luxurious than other intrepid crew quarters.

Probably the most significant thing about the Eagle since her refit is her completely new computer system, a state of the art Dual Core Bio-Neural Computers, A Primary and Auxiliary..

The Eagle has been designed to fill the role of a long range scout vessel, one that the current fleet does not have, with the addition of the pulse fire quantum torpedoes it gives the Eagle the ability to open with a devastating volley of firepower and the chance to get away and fight another day.

This style of defence/attack requires a certain type of Captain.

Captain Taboo is a dynamic unpredictable officer who has throughout his career demonstrated a flair for getting out of trouble as fast as he got into it.. When asked why he joined Starfleet he said simply, to "find his place" and "to make a difference..." His Command and Leadership style has been questioned by many of starfleets senior officers expressing concerns of loyalty and suitability. Captain Taboo has served on many ships in the fleet, the Kodiak, Steadfast, Independence, Resolution and at the Embassy on Duronis II and finally the USS Constitution-B. As a Science Officer, working his way up though the ranks the hard way he was shocked to be offered the chance to be the First Officer at the Embassy on Duronis II, from that point on he knew his goal was to some day command his own ship. With a background in Intelligence gathering his skills have made him a valuable member of the fleet taking advantage of his expert reading skills in in both Empathy and Telepathy. Taboo's loyalty to his Ship, Crew, Betazed and the Nature of the Universe is unquestionable.. Perhaps together, the Eagle and Captain Taboo can at last make a difference.

The Eagle carries 2 Type 9 and 2 type 11 Shuttles and a Captains Yacht.