From 118Wiki
< User:EJVerde
Jump to navigation Jump to search 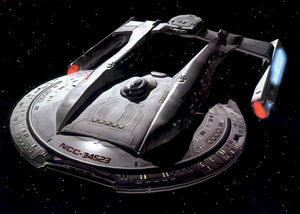 The USS Ronin is an Akira Class vessel under the command of Captain Idril Mar. Initially launched from Starbase 118 in 2375, the Ronin was the direct replacement for the USS Obertha and was commanded by Captain Skyfire. His departure from Starfleet a year later led to Captain Alder taking command of the Ronin until she also left in October 2377.

Following Captain Alder's unexpected departure, the vessel's first officer Michael James took command of the vessel in 2378 and acted as CO until the ship's decommissioning in January 2380. The vessel was taken out of mothballs and sent to the remote Ithassa Region to aid in the Gorn conflict of 2383. Following repairs, she was reassigned to the command of then-Commander Idril Mar in December 2383 and has remained in the region.

The heavily armed vessel is generally seen as a gunship, and in its history the Ronin has seen its share of conflicts with groups including the Grendellai and the Cardassians. However, under the command of Idril Mar the USS Ronin has also broken sterotypes and engaged in a variety of peaceful missions that have included a First Contact with the Sya-Negan and a diplomatic dinner with the Gorn.