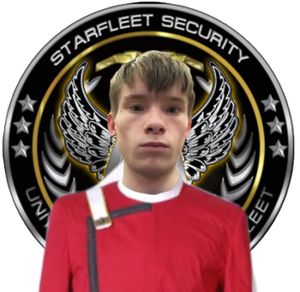 I am from Pennsylvania, USA. I have enjoyed Star Trek since I was about 6 or 7. I was first introduced when my dad showed me "Balance of Terror" (his favorite episode) from TOS. After watching all of TOS we watched all of TNG, then Enterprise, then I watched Voyager on my own, and am currently watching DS9 on my own. I have watched every movie and the only series that I don't have access to is Discovery (because I live in the US, so not on Netflix, and I don't want to pay for CBS All Access). Anyway, it has always been my biggest dream to be a part of Starfleet and when I found this I knew that it would be the closest I would ever get to the real thing. When I started out, I was a Vulcan named D'Vek. With him, I failed the Academy twice because of a lack of time due to school classes and I found it difficult to be unemotional (I am a very emotional person). So, to make a long story short, I made a new character: the human we all know as Ben Burns. Personally, I am not a very good writer or artist, but I am the creative type. I just put that creativity into Technological (Computer Science/IT) and Physical (Models of Starships and Pinewood Derby Cars) forms. I hope that this amazing group will help me through my struggles as they have already. I have loved every moment with this group of amazing people!

It all started in central Pennsylvania for Ben. He wanted to be a part of starfleet since he first saw Archer’s speech about the federation in history class in elementary school. It was his dream to captain a ship and be the best officer there ever was. After his high school graduation, he applied to Starfleet Academy. When he was asked about what he wanted to study/ what post he wanted to have, he realized that he hadn’t thought it through that far. He asked for a few days to think about it, thanks to the grace and leniency that starfleet had for him. He read through many of ship’s records. Especially the battles. He was fascinated by temporal mechanics as well. The more and more he thought about it, he realized that the amount of enjoyment he got out of reading about the fighting done by Starfleet, he wanted to do tactical. With a little bit of dabbling in temporal mechanics. He returned to the academy and picked his field. Throughout his years at the academy, he was one of the best in his class when it came to combat performance, marksmanship, hand-to-hand combat, weapons operation, weapons manufacture, and of course, temporal mechanics. But, that would all change during his final. He became cocky due to his outstanding performance in class and blew off studying for his final exam. That had him stuck on problems for a very long time. He passed, but not with flying colors. It was more like he passed waving a white flag. But, if he is put on a ship, who knows where his skills will take him.