From 118Wiki
< User:Aigle Phos
Jump to navigation Jump to search 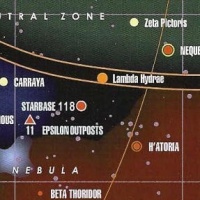 Starfleet's Trinity-Serellan Defense Fleet is a fleet of Federation starships that operate from Starbase 118. The small fleet is based here to assist with administration in the Trinity-Serellan region of space, an area of major strategic importance at the crux of Federation, Klingon, and Romulan space. The primary duty of the fleet is to support and defend the interests of Starfleet, including colonies, bases, and member planets. The fleet has jurisdiction across three sectors:

During peace time the ships in Starbase 118's Defense Fleet fall into one of four categories:

The vessels making up the Trinity-Serellan Defense Fleet rotate depending on Starfleet's requirements elsewhere and on the commanding Captain's desired configuration. The current configuration of Starbase 118's Defense Fleet during this rotation is detailed below.

Primarily to patrol the borders of the three sectors which Starbase 118 administers and to be on the watch for threats from both outside the region and within. Also they are to explore the boundaries of the sectors and ensure that stellar cartography records are all up to date and supply and support all Federation colonies and outposts in the region.

The fleet has two ships which are are kept docked at Starbase 118 as a backup to the main patrol outside the station. These two vessels are on hot standby. On the current rotation these are the USS Aegis and the USS Victory. These two ships remain docked at Starbase 118 and are ready to launch on five-minutes notice. They are designated to respond to any situations that might crop up within the region. To this end, a specially-trained StarBase crew mans these craft as a skeleton crew for the battle-ready designated vessels. Oftentimes the primary hot standby vessel, the USS Victory may be moved to mission active status and used by Starbase 118's command staff to follow up leads or react to specific situations. When this occurs, the smaller ship, USS Aegis, moves on to hot standby to ensure that there are always battle-ready vessels ready to leave Starbase 118 within five minutes.

These ships are supported by:

In the event that these three permanently stationed vessels are unavailable, one of the StarFleet vessels which are in dock for resupply or shore-leave will be designated as the battle-ready vessel. Whenever possible, if the battle-ready vessel is a visiting (temporary) ship, more than one will be designated as battle-ready to allow an "on" and "off-shift" for the skeleton crew so as to allow the ship's own crew the chance to disembark.

Vessels of closely allied political entities who are not members of the UFoP (i.e.- Klingons), are expected to assist in any defense efforts and are expected to be a part of the cool standby group. Currently no such ships are stationed.

When on cool standby, these ships interface with Starbase 118's computers to keep tabs on it's crew, who are expected to utilize the internal transporter systems to report for duty if the need arises. Due to the necessity of proper resource utilization, the cool standby vessel will often be rotated, to allow these valuable ships to see time in the field. If a heavy frigate is not available, up to three light frigates can be substituted at Starfleet's discretion.

The cool standby vessels are supported by:

Medical vessels, such as the Geneva-, Graceful- and Olympic-class vessels, are much more predictable in their configuration and missions. Dedicated to healing the injured, treating the sick, and pushing back the frontiers of medical knowledge, they have saved uncounted millions of Federation lives. Instead of flying "patrols", they go where ordered by Starfleet Medical or Starfleet Command, or accompany large contingents of ships heading into battle or other dangerous situations (though they carefully remain to the rear and display their medical emblems prominently).

Scientific pursuits remain at the forefront of Starfleet's agenda, and it is justly proud of its Research and Laboratory vessels. Ranging from the smaller Fermi-class "flying laboratory," which conducts experiments in zero-g and other space environments, to the large Nova-class planetary surveyor, they tend to be highly specialized. Many are modular, allowing different laboratory modules to be swapped in and out to reconfigure the ship for a specific mission with relatively little effort.