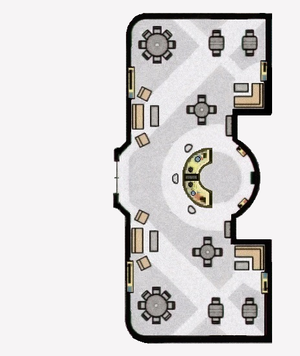 The Back Forty is the name given to the bar that was added on Deck 5 of the USS Victory by the engineering staff when renovating a section of the ship. It was decided that since the mess hall was only setup for large gatherings and meals for the ship's complement, a place of relaxation and socialization had to be added.

The Back Forty was set up to resemble an old Earth English style pub (circa 2000 A.D.) with wooden interiors, walls decorated with mementos and plaques that the crew of the Victory earned, and a unique bar and stools. For realism, the design staff and the engineers installing the tavern made sure that all, except the fireplace, was of real manufactured pieces. The fireplace was holographic.

As the Victory underwent a major refit in 2392, the Back Forty was repaired and redesigned along with it. Where the original Back Forty was simply a clever redressing of an existing mess hall, the new Back Forty was redesigned from the ground up, with input from Victory personnel. It is significantly larger than the original; allowing the Back Forty to host large diplomatic and recreational gatherings. Numerous tables and chairs fill the open spaces, and several groupings of couches and coffee tables line the walls. Among the recreational distractions available are Human Tri-D Chess sets, Vulcan kal-toh sets, and Strategema boards.

The walls, ceilings and columns were fashioned with real wood imported from Earth. The new Back Forty contained two fireplaces, one in each corner to the left and right of the entrance. While the fireplace structures were made with real stones and materials, the fires themselves were holographic, as a safety precaution. The establishment was illuminated with sconces simulating incandescent lighting, giving the place a warm, orange tint. As in the original, the walls were decorated with various items by or representing the crew and ship. Of particular note are gold models of the Intrepid-class Victory and the decommissioned Constellation-class Victory each mounted on the back walls around the corners from the bar; (at the tips of the 'U').

The centerpiece of the new Back Forty is the large bar with marble countertops. It is able to seat close to a dozen humanoids. A large bank of replicators are also installed on the rear wall. Behind the bar is a substantial stock of food and drinks from around the Galaxy; with such items as Saurian Brandy, Klingon Bloodwine (2309), and Chateau Picard wines.

On Stardate 236512.05, then-Lieutenant Commander Geordi La Forge, Chief Engineer of the U.S.S. Enterprise-D presented a hand-made, 1/100th scale model of the original British sailing ship, HMS Victory to Captain Marien Zimbata of the Constellation-class U.S.S. Victory, N.C.C. 9754. Commander La Forge had served with Captain Zimbata as an Ensign on-board that ship, and wished to honor his former Captain with this model. Captain Zimbata proudly displayed the model on his Victory for years, keeping it many years after that until his retirement from the Admiralcy.

At the 2392 re-christening ceremony of the current U.S.S. Victory, N.C.C. 362447, retired Admiral Zimbata presented Captain Nugra with the same model he proudly owned for many years. Zimbata wanted the crew of this newer Victory to have the model, instead of it sitting on a shelf in his home, he said. Captain Nugra subsequently placed the HMS Victory in a place of honor in the Back Forty lounge, where the entire crew of his ship could view it.