From 118Wiki
< USS Victory
Jump to navigation Jump to search

Unique Features of the Victory

Since the Victory's update in 2392, the ship has become home of some innovative and new technology designed by Starfleet Corps of Engineers, but also from the crew aboard ship. This page lists all the unique and prototype technology that the ship is field testing for possible inclusion through starfleet.

More information will be forthcoming on this unique team aboard the Victory. 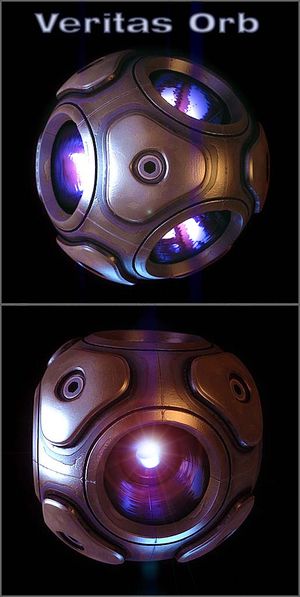 This project was carried on by Starfleet Research and Development and with contribution from Doctor Tarsii Asmara for inclusion aboard the USS Victory. The design is based on the device ALH 84001, a self-replicating mine developed by Miles O'Brian, Rom, and Jadzia Dax in 2373. The mine was no more than one meter in diameter and the capacity of self-duplicate itself. The Veritas Orb prototype is much smaller, equipped with anti-gravity generator, a programmable set of sensor pallets, subspace transponder, a tiny power pack and shields.

The orb was designed to do not exceed 30 centimeters in diameter and this high level of compaction took Starfleet R&D five years to achieve. After an extra half year of lab tests the first prototype of the Type II was approved for operation in 2391. It had a limited limited operation range of 305 meters and would use the combadge communicators to triangulate its position. All data exchange used a fractal-adaptive algorithm based on the officer’s DNA responsible for the release and control of the orb. It is virtually impossible to break. 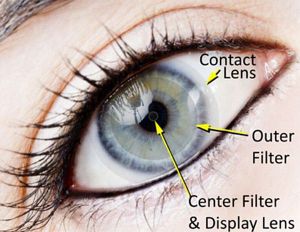 The basic application of the Veritas Orb is during an away mission where hazardous conditions could endanger the the team of either intel or science officers. The orb could be tracked down and controlled using a special PADD but first ground tests proved it was not appropriated. For this reason it was developed a display lens to be attached over the operating officer’s eyes for control. This way he could see what the orb saw and controlled it without the need of a PADD to enter commands. However, all the data and telemetry would be transferred to a normal tricorder or appropriate uplink to the ship.

There were situations where the orb would be blocked by heavy rock or metal wall. The solution for this problem was hit upon by a paper published by Doctor Asmara, a subspace astrophysics specialist serving aboard USS Victory. He was invited to help in the developing of the next generation of Veritas Orbs which would have the capability of change to a subspace domain for a short period of time. A subspace isolation field was in use and by suggestion of Dr. Asmara an experimental subspace discriminator was developed. This piece of innovative technology allowed the orb to apparently vanish from our universe for a brief time after a short tenuous flash of light.

The trick introduced by Dr. Asmara, since the equations and simulations were extremely complex to be solved inside the Isolinear, was to use phonon resonator to establish the space-time continuum destination location of the probe in our universe as soon he moved toward the subspace domain. After three weeks of intense work Lieutenant Asmara was allowed to bring three type II prototypes to test in a mission aboard USS Victory.

The technology has been labeled prototype by both Starfleet R&D, and the Starfleet Corps of Engineers with a two year evaluation before a decision would be made.