The USS Veritas is an extended-range medium cruiser commissioned in 2381 and the lead ship of her class.

During Rahman's tenure as captain, Veritas was assigned to serve the Federation colonies of the Colonial Coalition in the volatile region along the Tholian border known as the Shoals. With Starfleet's constrained resources in the post-Dominion War/post-Hobus era stretched over an ever growing list of domestic and foreign commitments across the two quadrants, Veritas was the sole Starfleet ship operating in the area, and her homeport in the Shoals was Star Station Esperance, on the non-Federation world Esperance.

Following a five-year tour of duty under the command of Captain Rahman, Veritas returned to drydock for refit in late 2398. She was replaced in the Shoals by two of her sister ships, the USS Concordia and USS Justitia. 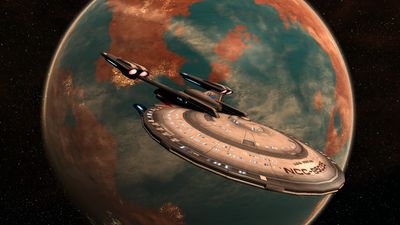