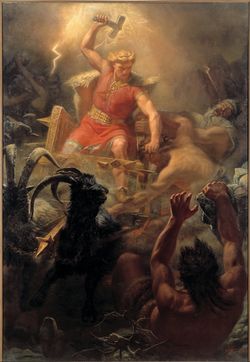 In May of 2399, the USS Thor investigated lost contact with a Federation research outpost in the Gamma Quadrant. While in orbit of a planet the ship was hit in the antimatter feed port by an unknown plasma based weapon and was nearly destroyed. After crashing to the planet's oceans, the Thor was mostly flooded, with major damage to her hull and the loss of both nacelle. Through significant effort and sacrifice of her crew, as well as the assistance of another Federation starship, the Thor was saved from sinking, returned to space, and towed back to Federation dockyards for total repair and refit.