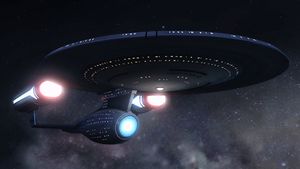 The Ambassador-class was developed at the San Francisco Fleet Yards. The U.S.S. Enterprise-C was the most famous Ambassador class starship ever commissioned by Starfleet. It was destroyed in battle in 2344 while protecting the Klingon colony on Narendra III from a Romulan attack, and all hands were presumed to be killed in action. This valorous sacrifice bought the Federation several decades of peace with the Klingon Empire.

Ambassador class vessels were later used in the Battle of Wolf 359 and throughout the Dominion War, and continue to be in service today for exploration, defense and patrol duties.

The USS Narendra was commissioned in 2345, exactly one year after the heroic sacrifice of the USS Enterprise-C. Her name a direct reference to the battle that ensured extended peace with the Klingon Empire, she is a ship that has a big legacy to live up to.

Commissioned as an explorer, the Narendra spent the first 30 years of her life as border patrol both exploring and continuing a mission of peace in the Borderlands, and continuing honorable contact with the Klingon Empire.

The Narendra made it through the Borg conflict acting as a support ship. Not involved in Wolf 359, it was one of the ships that stepped up in the aftermath.

She received her first major refit in 2371, which greatly expanded her shield and structural integrity, as well as upgrading her weapon systems to current standards. This was done anticipating the tensions with the Dominion.

From 2373 to 2375 the Narendra served in the Dominion war working with General K'Tak of the Klingon defense forces. In 2375 she suffered severe damage while defending the IKS Kartaga from a Dominion ambush. Once again the Narendra was lauded by the Klingons as an honorable ally, living up to its name; but the vessel had to be towed back to spacedock, staring decommissioning in the face.

Originally Starfleet intended to gut the Narendra to rebuild other ships - but as the Dominion War came to a close, they found that compared to other ships the Narendra had fared much better and her hull was still in good shape. She was re-commissioned in 2378 and used again for border patrol. In 2394 she received her second major refit, bringing her computer systems, science and scanning capabilities and weapons up to date yet again. The Warp engines were also upgraded to bring the safe cruising speed to Warp 6 to eliminate subspace disruptions from warp. The hull was checked and bolstered, the defensive systems were upgraded, and the ship was reassigned as the primary support vessel of Starbase 118

The Narendra's official motto pays homage to her legacy, but her Klingon allies granted the ship an unofficial motto: DabuQlu'DI' yISuv. (When threatened, fight.)