The USS Juneau has been assigned to a region of space known as the Aavaro Wilds - a region of space experiencing a power vacuum after withdrawal by Cardassian forces. Previously annexed by the Cardassian Union the Wilds were never fully integrated into the Union and were always a source of consternation for the Central Command. Now that the newly formed Democratic forces of Cardassia find themselves forced to consolidate and shore up their borders the Wilds have been deemed 'more trouble than they are worth.'

The Wilds has many areas unexplored, offering havens for Pirates, Outlaws, and peaceful civilizations alike and rather than allow the region to fall vacuum Starfleet has agreed to maintain a presence in the area, starting with the USS Eagle and followed up with the USS Juneau under the command of Oddas Aria. 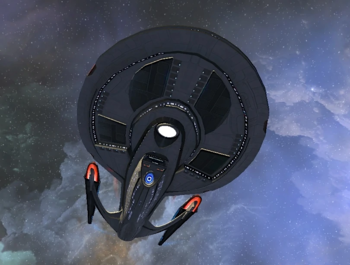 The USS Juneau was first launched as part of Project Capstone, a way to test the Warp XV Engine - the OR-400MV, theorized and designed by a team led by Oddas Aria and Roshanara Rahman. During that maiden voyage, during which many key systems including weapons and auxiliary systems were not installed, the Juneau crossed many regions in Federation space delivering key intelligence cargo - and found itself beset by saboteurs from the Orion Syndicate. Able to complete its mission it eventually returned to the shipyards at Utopia Planitia where the Engineers at SCE completed the installation of several key systems ranging from weapons to auxiliary craft to science labs.

The Juneau, while boasting a more a newer Warp Drive and more advanced science capabilities than similar ships, does pay the price for its experimental status by being forced to pick and choose the systems deemed necessary to receive power while flying at full speed.