Crypto is the name of the Intelligence Lab on the USS Eagle, located on deck one, behind the Bridge. Crypto is a high tech computer lab that is linked both to Star Fleet Intelligence Headquarters on Earth and the Fleet Intel Lead, at the Black Tower on Starbase 118. 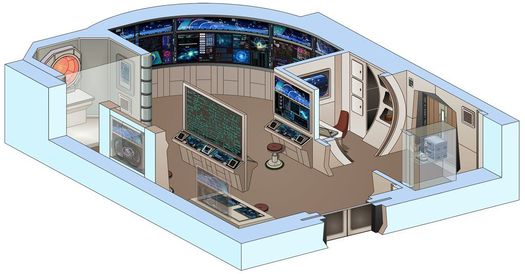 Hierarchically, Starfleet Intelligence maintains a central headquarters on Earth, where senior officers oversee the broad Intelligence mission. The vast majority of Intelligence work, however, is done by the field units, found throughout the Federation. Many field units may be grouped together into a taskforce.

The USS Eagle implores a top of the line Intel Lab called Crypto Lt. Commander Baylen Anders leads the Intel Unit on the Eagle. As the Eagle is not an instrument of the Intelligence division of Star Fleet in herself, then the Crypto lab is used more to receive information than to send it. How ever, Intel on Earth does track data coming from the Eagle.

Crypto can also be used as a CIC - Combat Information Center in a battle, but due to the nature of information that is in the Lab, it is restricted to Command Level Officers and those that have been granted access. But all the computer displays can be blacked out with one command and the data can be destroyed with two commands. If the ship is at Red Alert the Lab is automatically sealed off, if the ship is boarded then a level one force field is erected around the lab, if the force field is destroyed by the invader, the computers will self destruct.