From 118Wiki
< USS Doyle-A
Jump to navigation Jump to search

The bridge is the starship equivalent of an operations centre or command centre. On Starfleet ships it is generally located near the top and front of a vessel. From here the commanding officers supervise all ship operations, ranging from vessel course control to tactical systems. 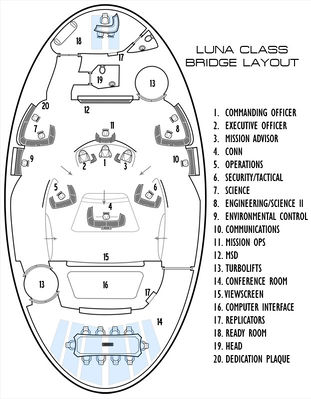 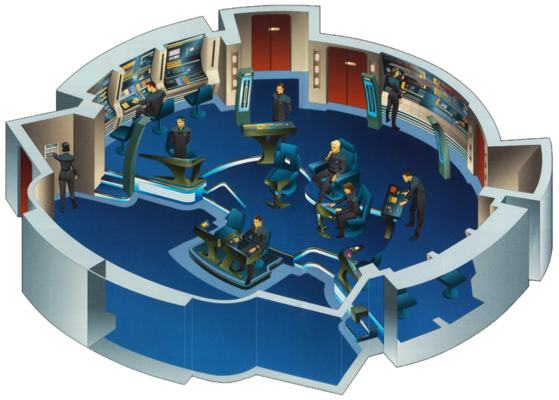 On the Doyle the bridge is located on Deck 1 on top of the vessel's primary hull. The bridge is the nerve centre of the ship, and it is manned by the top officers of each department except for Engineering, Medical and Marine. The bridge is accessed by one turbolift directly on the bridge from the front or from a second turbolift off the bridge.

At the front of the bridge, there is Ops and Conn. Behind that you have the Captain's, First Officer's, and Mission Advisers chairs. To the captains left, you have the Tactical and Security stations. Behind them you have two Engineering stations. On the Captain's right, there are five Science stations. The one closest to the Captain is normally manned by the Senior Science Officer on duty. At the back of the bridge is the ship's MSD. There are two Engineering stations that the Chief Engineer could use when on the bridge as well as five science stations that the Chief Medical Officer could use.

The Commanding Officer supervises all the ship's operations while seated in the command chair located in the centre of the room providing visual access to all major personnel stations and view-screens facilitating the decision-making process. The bridge command stations provide seating and information displays for the Commanding Officer and one or two other officers typically including the First Officer. The command chairs are located in the centre of the bridge to maximize interaction with all key bridge personnel while permitting an unobstructed view of the main view-screen. The armrests of the Captain's chair feature miniaturized status displays. Using keyboard or vocal commands, the Captain can use these controls to override the basic operation of the starship.