The USS Columbia (NCC-85279) is a Nebula class starship named in honor of the Earth space shuttle Columbia, which was the first space shuttle launched into space and a pioneer in Earth's early space history. USS Columbia left drydock almost exactly four centuries after her ancestor entered Earth's orbit for the first time. 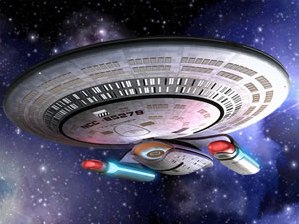 Commissioning of the new starship Columbia marked a change for Starfleet. With the Dominion War long over and peace talks with the Romulan Star Empire progressing, StarFleet shifted construction of its vessels away from wartime duty and toward its primary mission of exploration. The existing Nebula class design facilitated this change in mission.

Columbia eschewed the battle capabilities of some more recent vessels; she was instead well equipped with some of the latest breaking and largely untested Starfleet technology. What Columbia lacked in offensive firepower, she made up with technological advancement.

While she served through 2382 and part of 2383 as an exploration vessel, she was soon reassigned, with her crew, to StarBase 118 Operations. She was active as the field ship in that capacity, until 2384, when she was put into dry-dock for a review of her warp systems. Following the failed attempt at creating an artificial wormhole for incredibly fast interstellar travel, the Columbia was severely damaged. After limping back to StarBase 118, Captain Mal Avatar and his crew were transferred to StarBase 118.

Columbia's active service in support of StarBase 118 came to a violent end in 2390 when the ship was severely damaged during a mission. Extensive repairs were required, and Starfleet took the opportunity to refit the ship with upgraded systems and modules, including a new bridge module, expanded sensor capability, additional support craft, and other system upgrades.

On stardate 239107.14, Commander Ben Livingston took command of Columbia as it set out on a new mission of exploration. After an ill-fated mission where Captain Livingston was grievously injured and transferred to Starbase 118 for medical treatment, Commander Brek temporarily took command and the Columbia flew for 2 more missions before she was decommissioned on 239211.12. She returned to Earth for repairs and upgrades before returning to StarBase 118 as it's primary support ship on 239309.18 under the command of Captain Sal Taybrim and Lt Commander Theo Whittaker