The USS Avandar's Marine Facilities are located on Deck 10 next to Deflector Control and the Waverider Access Port. To access this deck requires security code clearance of Beta-Two or higher. 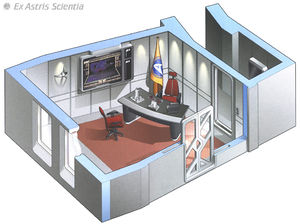 The Marine CO's Office is near the starboard access to the Marine Facilities. 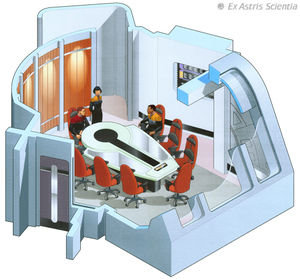 The Command Information Center (CIC) or Deployment Room is located next to the CO's Office and is the central location for coordination of all Marine activity on the USS Avandar. The Marine CIC is a briefing room with a large computer display and allows the Marine commanding officers to meet to discuss intelligence reports, current Marine operations, and any other Marine activities.

The Marine Armory is located at the center of the Marine Facilities and contains all Marine equipment not currently in use.

The Marine CO's quarters are on Deck 2 while the Marine squad leaders' quarters are part of the Marine facilities. Starfleet Marine personnel from the rank of 2nd Lieutenant up to Lieutenant Colonel are given one set of Officer's Quarters to themselves in an effort to provide a private environment to perform off-duty work. These accommodations typically include a small bathroom, a bedroom with a standard bed, a living/work area, a food replicator, an ultrasonic shower, and a personal holographic viewer.

The Barracks are the communal living area for the Marines. It is the area of the Marine facilities that is designed to house the Marines in one location but split in to Male and Female areas as dictated by military guidelines. The Marine Barracks are equipped with the minimum comfort that Starfleet must provide, and these minimum comforts include a bunk, an LCARS coded locker and footlocker as well as a communal bathroom to be shared between squads. This might seem sparse compared to the luxury given to Starfleet officers, but it is by and large the only comforts needed by Marines. 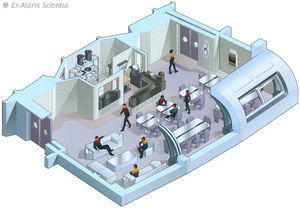 After working twelve-hour shifts, a Marine's main requirement is down time to relax and eat their meals. The Marine Mess Hall is a vital part of Marine life as it highlights the unit's need to live and work together in every aspect. It is expected of the Marines to eat at least three meals a day for strength and nutrients, which includes a diet designed for optimum efficiency by the Starfleet Medical Corps.

The gymnasium is an area of the marine Facilities which is dedicated to physical fitness and exercise training.

The emergency bridge can be found within the Marine Complex and is only used when the main bridge is unable to be used.