Difference between revisions of "USS Atlantis"

The USS Atlantis is an Intrepid class starship that takes its name from a mythological island on Earth that spawned an incredibly advanced culture in primitive times. The mythology states that the island was lost to the sea in a great cataclysm, and people for millennia after attempted to prove this island and culture even existed. Mostly, Atlantis represented what things could be like, and caused other cultures to strive for greatness too. 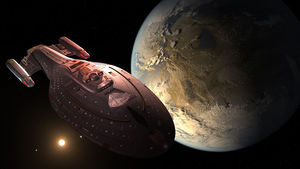 One of Starfleet's most advanced designs to date, the Intrepid-class Light Explorer comes equipped with a host of technology designed to help it perform its mission, and to give it the effectiveness of ships much larger and less maneuverable than it. These include multi-spectral shields, bio-neural gel packs and circuitry, and a variable geometry warp propulsion system.

The Intrepid-class can attain extremely high speeds not only because of its advanced warp core, but due to its variable geometry warp nacelles, which allow the ship to adjust its warp field for maximum efficiency. The class' streamlined shape also allows it to project an unusually efficient warp field. Since the class' primary mission profiles involve exploration and scientific experimentation, it possesses an extensive complement of laboratories and scientific facilities.

The captain's yacht attached to the Intrepid-class is a special ship known as an "Aeroshuttle." Patterned in part after the Danube-class runabout, it is larger and more maneuverable than a typical yacht, and capable of hosting a wide range of mission platforms.

Although not intended as a front-line combat vessel, Atlantis has powerful tactical systems. These include multiple Type-X phaser arrays and four high-yield torpedo launchers.

Most intriguingly of all, the Intrepid-class has atmospheric and planet fall capability - making it the largest Starfleet vessel with those abilities. When it lands, four large articulated "legs" emerge from the ventral side of the engineering hull to support it.

After a long period of decommission, the USS Atlantis was relaunched on Stardate 239102.01 under the command of Raj Blueheart. The Atlantis was assigned to Task Force 124 as the group's Flag Ship. This Task Force and the USS Atlantis were tasked to explore the Par'tha Expanse. The Atlantis was headquartered out of Deep Space 26. Blueheart's First Officer was Lieutenant Commander Tracey Townson. The Atlantis was to chart the Par'tha Expanse, discovering many secrets from it and hoping to establish peaceful relationships with the inhabitants of this little-known and unpredictable region. This mission lasted until 239207, when the Atlantis and Task Force 124 were recalled and reassigned, due to political pressure from the Valcarians within the Expanse. A possible war was brewing, and the active participants wanted Starfleet and the Federation to not get involved.

In 2393, once the Federation had pulled back, the Valcarians pressed the advantage, and the war with the Caraadian Houses of the Expanse Sector began. For the time being, it is contained to the Expanse Sector, and has not advanced as far as the Freeworlds Region, though its effects are being felt there. The Caraadians are requesting aid from the species of the Freeworlds Region, who are hesitant to help, fearing that they will incur the wrath of the Valcarian Empire on themselves. In 2394 Starfleet stepped forward with the Andaris Task Force, a small peacekeeping and medical fleet tasked with providing aid wherever needed. The Federation is hoping to curry favour with the Caraadian noble Houses, and with the Freeworlds Council, while not overtly engaging the Valcarians and extending the war to the UFP.

The Atlantis was one of the four ships originally assigned to the ATF, along with the USS Blackwell, the USS Darwin-A, and the USS El Corazón. The ATF was under the command of Rear Admiral Renos, stationed on DS26, while the Atlantis herself was helmed by Cmdr. Emery Rhyn as CO, and Cmdr. Brell as XO. After a short while Command of Atlantis passed to Capt. S'Ranna with LtCmdr. Udro Nepra as his XO.

In late 2394 command of Atlantis passed hands once more to one of it's former XOs. Cmdr. Brell now in command along with his XO LtCmdr. Alexander Williams relaunched Atlantis detached from the ATF with a new crew, and mission of helping the people of the Par'tha Expanse during the turbulent times gripping the region. To help in this deck 13 saw a major refit replacing several science labs with spaces for a Starfleet Marine detachment, and an state of the art Intelligence suite.

After two years of dedicated service, now Captain Brell received orders to report to the Embassy of Duronis II, meaning the Atlantis once again had to change hands, this time to a former member of the ATF, Cmdr. Jarred Thoran.