Difference between revisions of "USS Achilles" 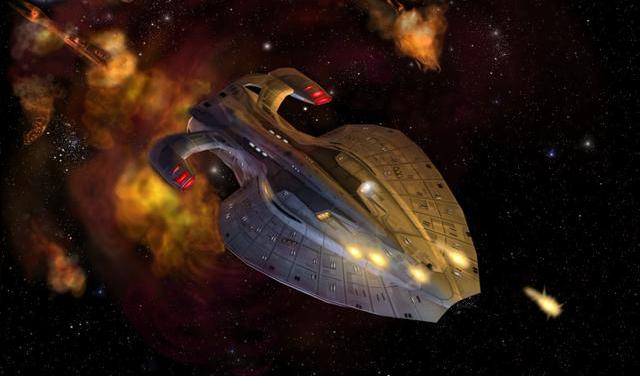 One of the critical strategic problems faced by Starfleet Command, if the Federation was going to win the Dominion War, was that the Federation forces were being spread too thin. Between defending the Federation territory from and trying to go on the offensive against the Dominion, in addition to keeping a wary eye on the Romulans, Starfleet found it had too many obligations and too few resources. This problem became even more acute when Starfleet strategists had determined that the 'Achilles Heel' of the Dominion was the dependency of the Jem'Hadar on Ketracel-White. If the Federation- Klingon Alliance could destroy, or even severely threaten, the Ketracel-White facilities the Dominion's Alpha Quadrant Offensive would grind to a halt. Unfortunately the only ships the either Starfleet or the KDF had that could do the job were the Galaxy and Negh'Var class ships.

Unescorted long-range strikes against heavily defended multiple targets currently could not be performed by any existing vessel. The Defiant-class, with sufficient firepower, had too limited an operating range. The Galaxy and Negh'Var classes, while having the range, were too expensive to risk. Neither the Federation nor the Klingons were willing to commit the large fleets required to hit these targets; to do so would have entailed compromising defense of key Federation and Klingon systems. A new ship of revolutionary design would be required.

Ship designers of Utopia Planitia were up to the challenge. They not only designed a totally new class of ship, the Achilles; they designed and built it in less than two years. By adapting current anti-Borg designs to the new threat, they developed a ship with revolutionary features that would enable the Achilles to fulfill the role as long-range cruiser with firepower nearly equal to a Sovereign Class cruiser. This was accomplished with the new micro-torpedoes arranged in a 'phalanx' array allows an astoundingly high rate of fire that could cripple any Dominion ship. With the arrangement of the phalanx system, the Achilles can protect itself against the strike fighters defending Ketracel-White facilities, while still maintaining its focus on destroying the target. Redundant warp and impulse nacelles were designed so the Achilles can sustain heavy damage and still maneuver. Dual rapid-fire Quantum torpedo turrets, based on the turret from the Sovereign-class, and a pair of enhanced pulse-phaser cannons, based on Defiant-class cannons, enables the Achilles sufficient firepower to destroy most large fixed targets in one pass. Finally, the Achilles has an unsupported, self-serviceable range equal to the Galaxy Class exploration vessels that is required to operate effectively behind the Dominion defensive perimeter.

Deployed for field testing in the closing weeks of the war under the command of Thomas Riker, the prototype Achilles performed admirably, destroying two key Ketracel-White facilities on its single mission behind enemy lines. It also accounted for two full Cardassian fighter wings, as well as nearly a score of Jem'Hadar strike cruisers in its mission, the best record of any single ship in the war. However successful, a number of problems were identified and the Achilles was returned to Utopia Planitia at the end of the war for refitting. The remainder of her hull was filled out with the non-warfare facilities that were called for in her original design, including a basic science department, multipurpose holodecks and upgraded ship-wide holo-emitters. She was retasked for system patrol and deep-space exploration then moved out for further field testing near the end of 2375.

THETIS, or the Tri-optical Humanoid-Equivalent Thought Integration System, was designed to be an advanced neural network for the new Achilles-class attack cruisers. However, during the initial test phases on the prototype system, the programmers found that Thetis had become self-aware. In a panic, they tried to shut the system down and fix what they saw as a problem. However, Thetis, or Tess as she likes to be called, managed to break through the lock-down in the comm system and appealed to the Starfleet JAG office for amnesty. The programmers were ordered to cease their attempts at reprogramming, pending a hearing on Tess' status as a sentient being.

Subsiquently, the Starfleet review board declared Thetis sentient and the designers were forced to incorporate her into the system. However, the Achilles-class designers have subsiquently removed any of the THETIS system from following ships of this class.

During her post-Dominion War upgrades, a ship-wide holoemitter system was installed to allow the EMH to report for emergencies. No holomatrix was created for Tess. However, she surprised her maintenance crews by creating her own holoprogram and now is able to project herself anywhere within the confines of the ship.

The keel of the USS Achilles, the ship that Thetis is integrated into, was laid at the Procyon Fleetyards. Her navigation and drive systems were finished there, then she was moved, under heavy escort, to the Utopia Planetia Fleetyards orbiting Sol IV (Mars), where the rest of her systems, including the AI, were subsiquently installed.

While extremely successful during the war and finished out shortly afterward, problems between her commanding officers and the Thetis system, however, resulted in the ship having 5 COs within a year, then being drydocked, unused, at Procyon for nearly six more.

Starfleet Command found a commander that was willing to try out the ship, however, in Fleet Captain Adler Wong-Aquiss. The first mission of the two was successful, evacuating a colony before the planet tore itself apart from internal sesmic pressure. The second mission was to stop a defecting Starfleet Admiral from reaching Romulan space; the Nemesis was intercepted and destroyed by 5 Norexean-class Warbirds, though she destroyed 2 and crippled two additional ships from the Romulan force.