From 118Wiki
< Toni Turner(Redirected from Turner, Toni/Sims)
Jump to navigation Jump to search

Falling in and out of Love 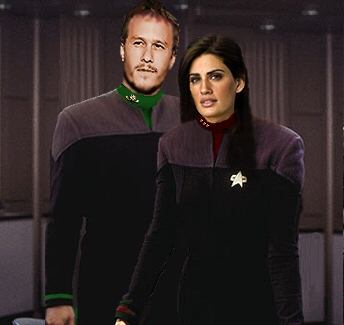 Background: Heath was on a covert mission to infiltrate the Scarlet Brotherhood's stronghold. Communications with his ship were non-existent, and while he was gone, Toni realized she may have held back her true feelings for him much too long.

::Curling up on one of the beds in a darkened corner, she lay in the quiet, listening for what she hoped would be the echos of his voice left within the walls, wanting to hear those pure tenor tones she had come to cherish...but there was only silence.::

::Closing her eyes, she tried to summon his voice from the recesses of her mind, and for an instant, she heard his laughter and envisioned that same mischievous grin that came with his boyish amusement. She smiled, hoping the vision would not disappear. She heard him call her name, and in her mind she ran to him, longing to be enfolded in his arms, and when she was, tears of happiness dripped from her eyes as she told him what she had been so afraid to tell him from the start... the one thing she had regretted not having said before he had left... the words she had withheld.::

::After eating dinner, Heath and Toni went back to the Bridge to spend some quiet time. For the next few hours they spoke of their hopes and dreams, talked of past experiences, and laughed at each other's jokes, but all the while the fact that they were completely alone was foremost in their minds.::

::Watching the stars before them, they were lulled into quietness, each of them lost in the secrets they had withheld for months. Finally, Heath stood, taking Toni's hand in his, giving her a look that hinted his thoughts. She stood, and without a word, let him lead her to the Captain's quarters.::

::As Heath closed the door, sealing them in the room alone, Toni was filled with many contradicting emotions - more than she could count or understand, and impossible to describe. The heart of the matter was that she loved him, and wanted to please him in every way, but had doubts that she could equally arouse the feelings of desire in him, that he had invoke within her every time her eyes fell on him... every time he uttered a word... his every smile... his every breath. She could not deny that her very existence was now centered by his presence in her life.::

::As he turned and moved toward her, she was filled with the anticipation of his touch. She wanted his lips to caress hers. She wanted to feel him arouse every yearning, and take them to the pentacle of passion. Yet, she turned away, pretending to inspect their surroundings.::

Turner: ::nervously:: Nice cabin, the furnishings look. . . very comfortable. ::moving to look closer at the artwork on the wall:: I absolutely love this painting, don't you?

::Heath couldn't help lifting that eyebrow of his as he moved toward her back, his hands curving over her shoulders and his lips touched the side of her neck. She was nervous though why he couldn't tell. She'd been alone with him a hundred times over but now... He slipped his arms around her waist and cuddled her back to his chest, peering over her crown to see the painting.::

::He couldn't tell her that he wanted to show her he loved her, where words weren't needed. He couldn't just come right out and say it, she'd probably smack him. He chewed the inside of his cheek as his head cocked to one side to look at the painting; why had she chosen a painting to look at? She'd admired the 'comfortable' furniture...::

::With Heath so near.. holding her so close.. a quivering started deep within her. Not a nervous shaking, but one that told her she was where she was meant to be.::

::She stopped, afraid to put her feelings into words. Would he lose respect for her, if she simply stated she wanted him and could no longer wait to feel the closeness of his love? ::

::His mouth refused to form syllabic words but instead his eyes drifted from her eyes to her lips. Slowly, he leant down, capturing her lips with his. Such a sweet kiss had never felt so awakening.::

::She closed her eyes. Her lips parted slightly, and the weakness of desire gripped her soul. She now knew she didn't have to tell him, nor did he need to tell her that they were on the verge of taking their relationship to new heights. ::

::Heath felt the change; the simultaneous change between them, relaxing and flowing together, close, hands finding each other as they shared the warm deep kiss which thrilled and excited him, sending shivers down his spine.::

::Her body seemed to mold into a perfect fit with his, and an urgency began to grow. She stepped back, almost paling, her eyes smokey slits as she gazed at him, then as suddenly as she had moved away, she moved eagerly forward to kiss him again.::

::His familiar smile didn't appear, instead it was replaced by Toni's lips, caressing and stroking his own into a frenzy. She'd had patience with him, she'd waited until he was ready to commit this fully to a relationship again. His palm found her cheek, his thumb brushing along the side of her cheekbone and his fingers resting below her ear. As she pulled back again, he did the same until they were a mere inch away from one another, breath falling upon one another and their eyes connecting, a look of urgent desperation, of need and desire reflecting back. He wasn't even sure if he spoke but he felt the words fall from his mouth.::

Turner: ::she stepped back, whispering breathlessly:: And I love you with all my heart.

::She held her arms out to him. He instantly broke his resolve and surveyed her body, then searching her eyes, he found his unasked question answered. He rushed to her waiting arms, knowing she was ready to love and be loved. Words were unnecessary. They were of one mind, valuing each embrace and sharing the passion of each tender kiss. In rare smoothness of motion, they bared themselves to each other. They caressed, almost reverently, as their fevered lips fed the flames between them. Time, and time again, the beauty and purity of their ritual brought fulfillment, and just before dawn their tender passions joined in a union of completeness, fearlessly sharing, at last, all the love they held within them.::